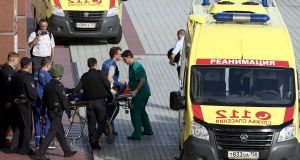 Police officers and medics bring a victim of a shooting to an ambulance at a court in Krasnogorsk, 30km west of Moscow, early on Tuesday afternoon. Photograph: Andrey Nikerichev/Moscow News Agency via AP

Russian police killed three men in a shoot-out at a courthouse near Moscow on Tuesday where a group of alleged gang members were being tried for murder.

Russia’s Investigative Committee said three members of the so-called Grand Theft Auto gang were shot dead by police after attacking guards in a court at Krasnogorsk, 30km west of Moscow early on Tuesday afternoon. Two other defendants in the case and a policeman were badly injured in the fighting that marked an unusual breakdown in security in the heavily guarded Russian court system.

The GTA gang terrorised Russian motorists with a series of attacks on vehicles on highways in the Moscow region in 2013-2014. Nine suspects, all of central Asian origin, are undergoing trial on charges of murder, banditry and other crimes, the Russian Investigative Committee said.

A hair-raising battle erupted in the lift at the Krasnogorsk court after an alleged member of the GTA gang attacked a guard and attempted to strangle him. Four other defendants in the same lift took advantage of the scuffle to undo their handcuffs and grab weapons from court security officials.

One of the guards raised the alarm and when the lift arrived at the third floor reinforcements from the Russian national guard were waiting. In the carnage that followed three of the defendants tried to escape but were shot dead by security officers. Two other defendants were seriously injured and taken to hospital.

Three law enforcement officers also suffered injuries, including one with a gunshot wound.

Eyewitnesses said they had heard at least 20 shots fired during the battle. Sofia Rubasskaya, a Russian defence lawyer, told the Ria Novosti news agency that she had seen a wounded female court bailiff whose face was covered with blood.

The court case against the GTA gang opened in August 2016, with nine suspects being tried for the murder of 17 motorists on the M4 Don motorway running south out of Moscow.

Named by Russian media after the popular video game, “Grand Theft Auto” worked at night, placing metal spikes on highways to puncture the tyres of passing vehicles and then retreating into the shadows. When the drivers of disabled cars emerged from their vehicles the gang would attack, shooting their victims in cold blood.

The GTA investigation has been shrouded in secrecy, possibly to avoid inciting hatred of central Asian migrants who are already widely resented in Russia.

There has been intense speculation in Russian media about the motives for the spate of murders. Gunmen were crack shots and often fled the scene of the crime without bothering to remove valuables from attacked vehicles.

Some commentators said the gang could be linked to Islamist militants using Russian highways as a training ground for terrorist operations elsewhere.

In a bizarre twist to the case, Russian investigators said that one of the gang leaders arrested in late 2014 had rented a house from a senior official in the Russian prosecutor’s office and used the property to store arms and ammunition.

Reporting the shoot-out on Tuesday evening, Russian state television said one of the GTA group had fought for Islamic State in Syria before coming to Russia.