Up to 20 may still be missing after Genoa bridge collapse

Italian firefighters carried out a dramatic rescue on Tuesday (August 14) retrieving a person who had been caught in the mangled ruins of his car suspended in the air after the collapse of a motorway bridge. 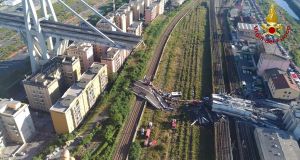 Rescuers at work amid rubble and wreckage after the collapse of a section of the Morandi motorway bridge in Genoa. Photograph: AFP/Getty Images 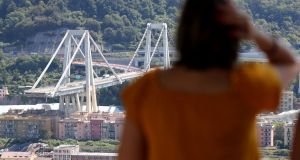 A woman looks at the collapsed Morandi Bridge, in the port city of Genoa. Photograph: Stefano Rellandini/Reuters

As many as 20 people could still be missing in the rubble of the collapsed Morandi Bridge in Genoa, the city’s chief prosecutor said.

Searchers have been combing through tonnes of debris since the collapse of the structure on Tuesday which left 39 people confirmed dead. Genoa chief prosecutor Francesco Cozzi told reporters that “there could be 10 to 20 persons still missing”.

Interior minister Matteo Salvini said it has been difficult to come up with an exact number as some of those reported missing by loved ones might actually be holidaymakers who reached their destination and have not contacted family or friends in recent days.

Authorities have announced plans for a state funeral for the victims to be held on Saturday morning in the north-western city, with the day designated one of national mourning. The ceremony will be presided over by Cardinal Angelo Bagnasco, the Genoa archbishop.

A day earlier, the Italian cabinet approved a 12-month state of emergency for the area, and Italian premier Giuseppe Conte said his government will not wait until prosecutors finish investigating the collapse to withdraw the concession from the main private company that maintains Italy’s highways, Atlantia.

The European Union has hit back at an Italian claim that the collapse was somehow linked to budget restraints imposed from outside Italy.

EU spokesman Christian Spahr reacted after Mr Salvini criticised rules that limit budgetary spending, and linked them to the safety of infrastructure. Italy has been criticised by the eurozone for budgetary gaps and had been called on to rein in spending.

Mr Spahr said that “the time has come to make a few things clear”, insisting that in the 2014-2020 EU budget plan, Italy is set to receive around 2.5 billion euro under EU investment plans for network infrastructures — including roads.

He added that in April, the EU “also approved under EU state aid rules an investment plan for Italian motorways which will enable around 8.5 billion euro of investments to go ahead, including in the Genoa region”.

“In fact,” Mr Spahr said, “the EU has encouraged investment in infrastructure in Italy.”

Survivors of the collapse have described the moment the road fell away beneath them.

Davide Capello said he was driving across the bridge on Tuesday when “I heard a heavy sound, and I saw cars in front of me falling”.

He added: “I saw the road collapse then I fell with them. I thought it was all over for me.”

But he said he suffered only minor injuries because his car fell between concrete blocks that formed a sort of protection from further damage.

‘Running until the tunnel’

A French woman, identified only as Leonine, said she was travelling across the bridge with her husband and three-year-old son at the time of the collapse.

She said: “We saw the pylon go completely to the right, and we realised what was happening.”

They tried to reverse the car, then “opened our doors, took our son out of his car seat and then left, running until the tunnel”.

The collapse occurred at about noon on Tuesday, on the eve of Italy’s biggest summer holiday, when traffic was particularly busy on the 51-year-old span that links two major roads — one leading to France, the other to Milan.

A 20 million-euro project to upgrade the bridge’s safety had already been approved prior to the collapse, with public bids to be submitted by September.

According to business daily Il Sole, improvement work would have involved two weight-bearing columns that support the bridge — including one that collapsed on Tuesday.

The bridge, considered innovative when it opened in 1967 for its use of concrete around its cables, was long due for an upgrade, especially since it carried more traffic than its designers had envisioned.

The bridge collapse has given rise to concerns across Europe about infrastructure, with experts warning that some road bridges are in a dangerous state

The French transport minister has warned that the country’s road network is in a “critical state” after a report submitted to the government before the Genoa bridge collapse revealed a third of the country’s road bridges required repairs and 841 posed a potential risk.

In Italy, as many as 300 bridge are reported to be at risk of failure. They include a bridge near Agrigento, Sicily, designed by Ricardo Morandi, who also designed the Genoa bridge, that was closed by local authorities in 2017 because of structural damage in its pillars.

The summary of the general audit on the state of France’s road network was published in July. Its authors reported a “marked deterioration” of French roads in general and particularly bridges and viaducts.

Elisabeth Borne, the French transport minister, said she would be presenting new legislation including a programme reviewing the country’s infrastructure next month. The government is also proposing a new € 1billionn plan to “safeguard the road network” and carry out urgent repairs.

In Germany a report last year by the federal highway research institute found that while only 12.4 per cent of Germany’s road bridges – many of which were built in the 1960s and ’70s, and not designed for today’s increasingly heavy freight traffic – were in bad condition, just 12.5 per cent were considered good.

In the Netherlands, the Dutch transport sector lobby group TNL said it was concerned by the state of road bridges maintained by local and provincial authorities, but relatively happy with the condition of those looked after by national government. – AP/Guardian