Video footage of an exchange between Jean Claude Juncker and Theresa May appears to show a tense UK Prime Minister confronting the president of the European Commission before discussions yesterday (December 13th). Video: EU Commission 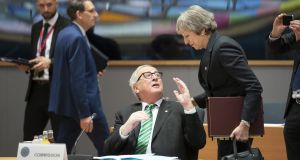 Jean-Claude Juncker and Theresa May at a European Union summit in Brussels on Thursday. Photograph: Jasper Juinen/Bloomberg

Theresa May’s attempt to rescue her Brexit deal ran into serious trouble in Brussels on Thursday night, after despairing EU leaders accused her of having no viable proposals to sell her plan to a hostile British parliament.

The British prime minister, already wounded after more than a third of her MPs voted to oust her in a confidence vote, arrived at a European Council meeting to a warm reception from EU leaders who want to salvage the Brexit deal.

But during an hour-long presentation, Mrs May succeeded in alienating many fellow leaders after making a series of ambitious proposals to appease her domestic critics, including a one-year time limit on the Irish backstop.

After Mrs May left the room, many leaders were despondent. During more than two hours of talks over dinner, EU leaders agreed to scrap plans for a formal process to provide reassurances to Britain until Mrs May decided what she wants.

“This debate is sometimes nebulous and imprecise,” said Jean-Claude Juncker, European Commission president. “When it comes to the future relationship, our British friends need to say what they want, rather than asking us what we want.”

A video of Mr Juncker and Mrs May later emerged appearing to show a tense confrontation during the summit on Thursday.

Michel Barnier, EU chief Brexit negotiator, claimed that Mrs May was not seeking reassurances but was reviving old ideas rejected during Brexit negotiations. One EU diplomat briefed on the talks said Mrs May was “unprofessional”.

Another EU diplomat claimed that there was even a suggestion that it might have been better if Mrs May had been ejected from Downing Street in this week’s abortive coup by Tory Eurosceptics.

“She didn’t know what she wanted,” the diplomat said.

Mrs May insisted during her presentation that she could change the “dynamic” at Westminster and overcome a wall of hostility in her ruling Conservative party towards her compromise plan.

She urged the EU27 to offer a legal tweak that would, in effect, put a one-year time limit on the Irish backstop, which is seen by Eurosceptic MPs as a “trap” to keep the UK in a permanent customs union.

But her presentation, which also included a suggestion that the non-binding political declaration on future UK/EU relations should be given a legal footing as an annexe to the legal withdrawal treaty, went down badly.

“It was Salzburg all over again,” said another EU diplomat, referring to the acrimonious summit in September.

While Mrs May battled to save her deal and her job in Brussels, Tory Eurosceptics called for her resignation, brushing aside the prime minister’s victory by 200 votes to 117 in Wednesday’s bruising vote of confidence.

Mrs May was forced to abort a planned Commons vote on her Brexit deal this week, rather than face a heavy defeat, and now has a tough job to persuade the EU that she has realistic proposals to salvage it.

Addressing a European Council dinner, Mrs May said: “There’s a majority in my parliament who want to leave with a deal. With the right assurances this deal can be passed. Indeed, it’s the only deal that can get through my parliament.”

Sebastian Kurz, chancellor of Austria and current holder of the EU presidency, suggested that another EU summit on Brexit could be needed in January, although after last night’s dinner all preparations are on hold.

In a sign of the concern among the EU27, draft summit conclusions were rewritten to remove the observations that the backstop did not represent a desirable outcome for the EU and would be in place only for a short period.

Another paragraph, saying the union stood “ready to examine whether any further assurance can be provided” on the backstop, was cut entirely. One diplomat said that despite general goodwill towards Mrs May, she “didn’t get anything, basically”.

Although Mrs May urged her colleagues to “trust my judgment”, faith in the British prime minister’s political nous has been badly shaken by recent events, especially her spectacular failure this week to persuade her own party to back her Brexit deal.

To increase the pressure on Mrs May, the European Commission will prepare a raft of new contingency plans on December 19th for a “no deal” exit.

At a tense meeting before the summit Leo Varadkar warned Mrs May against seeking any substantial changes to the backstop.

Mrs May conceded that she was not expecting an “immediate breakthrough” at the two-day summit, as she prepares to present a revised deal to a hostile parliament ahead of a self-imposed deadline of January 21st.

Number 10 said after Thursday night’s meeting that the EU was privately insisting that talks on “reassurances” over the Irish backstop had not been ruled out.

“We must get this right,” Mrs May said. “Let’s hold nothing in reserve. Let’s work intensively to get this over the line for the interests of all our people.”

The summit has exposed a difference in tone among European leaders in their approach to Mrs May, with Mark Rutte, Dutch prime minister, and Angela Merkel, German chancellor, keen to work closely with Britain to secure an orderly withdrawal. - Financial Times

3 Q&A: What are the new coronavirus variants and should we be worried?