Zimbabwe lifts ban on election monitoring by EU and US

President Mnangagwa is seeking to rebuild bridges with international community 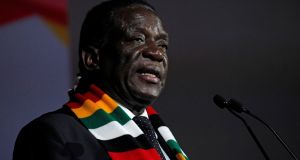 Zimbabwe’s president, Emmerson Mnangagwa, who has repeatedly said this year’s general election will be held in a “free and fair” manner. Photograph: Luc Gnago/Reuters

Zimbabwe’s new government has set aside its long-standing ban on western observers’ involvement in the country’s polls, inviting the European Union and US to monitor this year’s crucial general election.

The EU and US are both on a list of 61 countries and international bodies that will be officially invited by the government to send observers to participate in the election earmarked for July, Zimbabwe’s state-run Herald newspaper reported.

Other countries on the list include Ireland, Russia, Norway, Switzerland, Turkey, China, Canada, Australia, New Zealand, Japan, Cuba and India. The Common Market for East and Southern Africa, the African Union Commission and the Pan-African Parliament have been also been invited, as have representatives from the Commonwealth.

The EU and US had been banned from monitoring Zimbabwe’s elections since 2002 when relations with the Robert Mugabe-led government soured over human rights abuses his Zanu-PF regime allegedly carried out.

Mr Mugabe’s regime stands accused of rigging most national elections since the 2002 presidential poll, which international observers judged not to have been conducted in a free and fair manner by his government.

However, since Mr Mugabe was ousted from power in November, his successor, Emmerson Mnangagwa, has tried to assure the international community that the ruling Zanu-PF party under his leadership has recommitted to the principles of democracy.

His attempt to build bridges between Zimbabwe and the West is down to the southern African country’s desperate need for large-scale investment to revive its crippled economy.

For such investment to be forthcoming, international companies and foreign governments need assurances that the country has left behind the corruption that took root under Mr Mugabe, and recommitted to democracy and the rule of law.

As part of Mr Mnangagwa’s public relations drive to provide these assurances he has repeatedly said this year’s general election will be held in a “free and fair” manner. In addition, he said the outcome would be respected.

Diplomatic sources in Harare told The Irish Times that allowing western observers to monitor the poll has gone a long way to backing those statements up, and there is currently an air of optimism in the capital.

“Zimbabweans are full of optimism that this government is embracing change,” the source said. “And I am hearing the hotels in Harare are full of investors making enquiries about various business opportunities.”

However, opposition parties have claimed that Zanu-PF has already started to deploy military personnel in rural areas to intimidate people to vote for it, and for Mr Mnangagwa, its presidential candidate.

This includes “repealing or amending repressive legislation” and introducing measures to “ensure the political neutrality of security forces and their non-interference in Zimbabwe’s civilian and electoral affairs”, he said.

“Without these security sector and electoral reforms, inviting international observers alone will not level the electoral field,” Mr Mavhinga concluded.