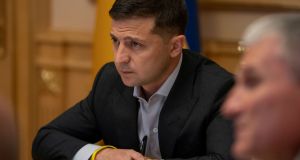 Ukrainian president Volodymyr Zelenskiy: has vowed “to give protection, refuge and Ukrainian citizenship to all those who fight for freedom . . . And first and foremost to Russians, who today suffer most of all.” Photograph: Ukrainian Presidential Press Service/Reuters

Ukrainian president Volodymyr Zelenskiy has issued a decree to make it easier for Russians facing political persecution to become citizens of Ukraine, amid a violent police crackdown on opposition protesters in Moscow.

Mr Zelenskiy ordered Ukraine’s government to submit a Bill to parliament that also offers a streamlined citizenship process to foreigners who have fought for the country or otherwise aided its response to five years of Russian aggression.

With the decree, announced by the presidential administration in Kiev on Tuesday, Mr Zelenskiy moved to fulfil a promise he made after his landslide election victory in April.

The erstwhile comedian vowed to make Ukraine “an example of democracy to post-Soviet states” and “to give protection, refuge and Ukrainian citizenship to all those who fight for freedom . . . And first and foremost to Russians, who today suffer most of all”.

Mr Zelenskiy (41) made that pledge after Russian president Vladimir Putin offered fast-track citizenship to Ukrainians living in eastern areas of the country run by Moscow-led militants – which he later extended to people living in Kiev-controlled parts of war-torn Donetsk and Luhansk regions.

The decree to make it simpler for Russians “persecuted because of political convictions” to become Ukrainians was issued following major protests in Moscow against attempts to stop independent candidates running in city elections and more broadly against Mr Putin’s 20-year rule.

More than 2,000 people have been arrested during the rallies, at which the only obvious violence came from ranks of riot police who beat many protesters with truncheons before hauling them away to detention cells.

Mr Peskov said the war in Ukraine, which has killed more than 13,000 people and displaced 1.6 million, would be on the agenda when Mr Putin flew to France next Monday for talks with its president, Emmanuel Macron.

“President Zelenskiy has made offers to which – it seems to us – President Putin should respond in an encouraging way,” an unnamed French official told Reuters on Tuesday. “We will intensify our efforts on the question of Ukraine, notably within the Normandy format . . . The election of President Zelenskiy gives us some room to manoeuvre.”

Mr Peskov said contact between the Russian and Ukrainian presidents “can only be assessed positively”.

“Putin is a totally pragmatic interlocutor, and for him the most important thing is not the conversation itself but the realisation of understandings and agreements that were reached earlier,” he said.