From school to the grave, military service tears families apart in Eritrea 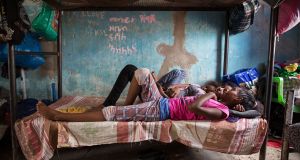 Hunched in concentration in a refugee camp in northern Niger, Hamid draws pictures of the woman he left behind in Eritrea. They’re basic but spirited, done with crude coloured pencils on whatever scraps of paper he can find. In them she is beautiful, like the photos of her he looks at on his phone.

They were in love once, he told me through Facebook messages. They wanted to get married, but he can’t return to Eritrea or he will be taken away for mandatory, indefinite military service. Hamid, who is in his early 20s and asked to go by a pseudonym for safety, planned to reach Europe and have her come to join him.

Instead, he got stuck in Libya, locked between detention centres, smugglers and exploitative jobs he worked to raise money to try to cross the Mediterranean by boat. Earlier this year, he was finally evacuated from Libya by the United Nations Refugee Agency, and will be resettled to Europe soon.

For his relationship, it’s too late. “Her mom said to my dad we can’t wait a long time because maybe the policemen will take her to the military camp,” Hamid says. “My story with her is finished. Another man will marry her.”

Both are victims of the Eritrean policy of forced military service, which begins for all citizens when they’re teenagers. Since the late 1990s, Eritrea’s dictator Isaias Afewerki and his People’s Front for Democracy and Justice (PFDJ) have used indefinite national service to repress and control the population. The only way out for many is death, escape from the country, or marriage and motherhood for women.

Many Eritreans have stories like Hamid’s, of families torn apart by forced labour on a scale activists say is similar only to what happens in North Korea. Eritreans recall losing friends who were shot while trying to flee, or being imprisoned and tortured underground if they are caught alive. One teenager, now in Europe, told me how his father died in the Sinai desert trying to get away, after decades of being kept in the military, far from his family.

At one point, thousands of Eritreans were fleeing the country every month, crossing into neighbouring Ethiopia or Sudan.

There are about half a million Eritrean refugees registered outside the country now, according to the United Nations Refugee Agency, meaning roughly 10 per cent of the population have escaped the small Horn of Africa country.

In Eritrea “very basic civil rights and freedoms are severely restricted and the Eritrean government has a very deep entrenchment of control over its entire population”, she said.

A new 84-page Human Rights Watch report looks at how secondary school is at the heart of Eritrea’s repressive system, and used as a channel right into military service. “This was a post-war effort after the independence of the country. What it’s converted into is a system where everyone is forced to work for the government,” said Bader.

Eritrean teenagers are expected to finish their last year of secondary school in Sawa military camp, infamous for its isolation, as well as how harsh the treatment is there. Each year thousands of students are sent to Sawa. Some girls and women are also victims of sexual harassment or abuse by military officials there, according to Bader.

“They are making us into slaves, not educating us,” one former student told Human Rights Watch.

The Eritrean regime has long defended the indefinite military service by pointing to its ongoing conflict with Ethiopia. In July 2018, a peace deal was finally struck. Human rights groups say this removes any justification for maintaining the national service system.

“We’re asking the government to make sure there are no more children being forcibly conscripted,” said Bader. “[The Eritrean government] needs to disassociate the last year [of school] from mandatory military training. They need to give students the choice not to spend their final year in the Sawa camp.”

“Eritrea is such a hard country for its people. The government is so hard,” said Hamid. “Military of Eritrea life [is the] devil.”