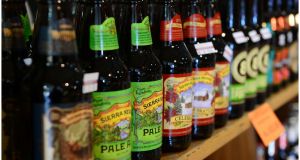 Sixty-four per cent of off-licences which responded to the National Off-Licence Association survey said their sales volumes had declined by up to 40 per cent since 2012. Photograph: Bryan O’Brien

The umbrella group for off-licences has called for a cut in excise duty on alcohol to curb the rise in cross-Border shopping as a result of Brexit.

In a pre-budget submission, the National Off-Licence Association (NOffLA) said Ireland remained the most expensive country in the European Union in which to buy alcohol, with prices reckoned to be around 175 per cent above the EU average.

It said the recent devaluation in sterling had prompted a big upswing in shoppers travelling to Northern Ireland to take advantage of the favourable exchange rate, which had further damaged trade here.

This meant businesses, particularly those operating along Border counties, were now in danger of commercial failure, it claimed.

Noffla said the share of Irish-registered cars in Northern Irish shopping centres rose by 73 per cent between January and September last year due the weakened sterling.

To help mitigate the impact of Brexit, it wants the Government to reduce excise duty on alcohol by 15 per cent, equating to 10 cents on spirits/beer/cider and 50 cents on a bottle of wine.

This would support Ireland’s already struggling regional and local economies by increasing rural employment, as well as securing the livelihoods of communities in Border regions, particularly considering Brexit, it said.

It also wants the Government to apply parity to wine taxation in relation to domestic alcohol, noting retailers and suppliers need to raise and pay an extra €17,958 per 1,000 cases of wine in excise and VAT due to increases in Budget 2013 and Budget 2014, which now totalled €47,035.

The group is also seeking a reintroduction of the ban on the below-cost selling of alcohol to ensure retailers cannot reclaim 23 per cent of the loss in their VAT return, which it said would save the exchequer an average of €24 million each year.

Such a ban would also ensure that alcohol is sold in a responsible manner by retailers through the elimination of deep discounting, it said.

A members’ survey, published alongside the submission, indicated that 75 per cent of surveyed off-licences had experienced either negative or no growth in their businesses in 2016.

Sixty-four per cent said their sales volumes had declined by up to 40 per cent since the first excise increase in 2012 and 83 per cent reported that below-cost invoice selling would have a negative impact on their businesses in 2017.

It also found that if alcohol excise is increased in Budget 2018, 44 per cent of licences would struggle to remain open.

Evelyn Jones, government affairs director of NOffLA said: “The independent off-licence sector continues to face significant challenges associated with a punitive alcohol tax regime that is not in line with other European nations and is damaging not only local communities but also our national competitiveness.”

“This situation has now been exacerbated by the likely impacts of Brexit, and the debilitating impact cross-Border trade will have on Irish SMEs,” she said.

“A reduction in excise on alcohol would benefit not only the Irish SME sector,

safeguarding jobs and promoting growth, but also the sustainability of towns across Ireland,” she added.