Analysis: Voters don’t trust Labour leader on security but Theresa May has had poor week 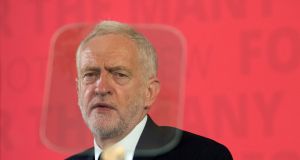 Jeremy Corbyn’s decision to return to the campaign trail with a speech linking the Manchester bombing to Britain’s foreign wars was risky in a number of ways. He has exposed himself to accusations of bad taste from both the Conservatives and Liberal Democrats, who claimed it was disrespectful to the victims.

It has also drawn attention to one of the Labour leader’s vulnerabilities – the fact that most British voters lack confidence in him on issues of national security and defence. And it highlights one of the deepest faultlines within his party, between those who support military intervention abroad and those, like Corbyn, who oppose it.

Corbyn stressed that sole responsibility for the Manchester bombing lay with the perpetrator, but he said that British-backed interventions like the war in Iraq and the overthrow of Muammar Gadafy have fuelled terrorism.

“Many experts, including professionals in our intelligence and security services have pointed to the connections between wars our government has supported or fought in other countries, such as Libya, and terrorism here at home,” he said.

“Protecting this country requires us to be both strong against terrorism and strong against the causes of terrorism. The blame is with the terrorists, but if we are to protect our people we must be honest about what threatens our security.”

Corbyn was speaking after a number of polls conducted since the Manchester attack showed the gap between the Conservatives and Labour narrowing further. A YouGov poll for the Times puts Labour within five points of the Conservatives, compared to 24 points when May called the snap election. The numbers in the YouGov poll would still see the Conservatives win the election, but with a majority of just two seats.

The Conservatives’ decision to put the choice between May and Corbyn at the centre of the campaign has amplified the impact of her wobble last weekend over the party’s manifesto. Sold as a “strong and stable” leader, her U-turn on how much old people should pay for social care made her appear weak and wavering.

The Manchester attack paused the campaign at May’s moment of greatest vulnerability and offered the possibility of a reset after a few days when the public saw her engaged in the serious business of keeping the country safe. The attack has exposed another vulnerability, however, in the shape of her record as home secretary, when she cut police numbers by 20,000.

Corbyn on Friday promised to reverse those cuts, put more police on the streets and give the security services the resources they demand. In bringing the issue of terrorism into the campaign, Corbyn may have less to lose than May, who has serious questions to answer about whether her actions in office hampered the effort to thwart terrorism.

Despite the latest poll numbers, few in Labour believe they will win the election, but Corbyn’s strategy of focusing on his own base rather than seeking to occupy the middle ground could help to prevent a Conservative landslide.