December 11th, 2018: Shuttered shops, burning cars and tear gas. The New York Times were on the ground in Paris with the “Yellow Vests” protesters as they took to the streets for the fourth week in a row. Video: NYT 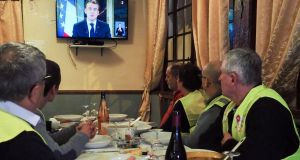 President Emmanuel Macron on Monday night broke his silence over rioting that has plunged his presidency into its greatest crisis, promising a “new contract for the nation”.

The French leader announced immediate measures to increase purchasing power, including a €100 rise in the minimum monthly wage, the cancellation of the increase in the general social contribution for pensioners earning less than €2,000 monthly, and an end to taxes and social charges on overtime from next year.

Mr Macron also asked “all employers who can do so” to give employees a year-end bonus that will also be exempt from tax and social charges.

A solemn Mr Macron spoke to camera, seated, with his hand flat on the table in front of him. He came across as chastened yet determined and looked younger than usual.

The French leader began the most awaited speech of his presidency by denouncing the violence surrounding demonstrations by the “gilets jaunes” or yellow vest movement on December 1st and 8th.

Four people have been killed, hundreds injured and more than 4,500 people arrested since the protests started. They were initially over a carbon tax on diesel and petrol. Prime minister Edouard Philippe announced on December 5th that the tax was “suspended”. That was later changed to “cancelled”.

“The events of recent weeks . . . have profoundly troubled the nation,” Mr Macron said. “They mixed legitimate demands with an inadmissible cycle of violence . . .”

Many of those arrested in connection with the violence have received suspended prison sentences only.

Mr Macron also denounced the political parties who have in a sense freeloaded on the misery of France’s poorest citizens. All parties except the president’s République en Marche have declared “solidarity” with the yellow vests. “We have seen the game of opportunist and irresponsible politicians whose sole goal was to shake the republic,” he said.

Most participants in yellow vest demonstrations say they identify with no party, or with extreme-right or extreme-left-wing factions.

As if on cue, the far-left leader Jean-Luc Mélenchon reacted to Mr Macron’s speech saying that “the president’s words are vain. Act five [of the protests] next Saturday will be a moment of great mobilisation.”

Marine Le Pen’s National Rally, the former Front National, portrayed the conflict as part of the rise of nationalist populist movements across Europe and around the world. “In his speech, Mr Macron showed he has not understood a movement that must be analysed as a revolt against savage globalisation, against the global caste that enslaves people, against looting by great financial powers,” said a statement from the party.

After rejecting the violence surrounding the protests, Mr Macron expressed understanding of the anger of the yellow vests. “This indignation, many French people may share it,” he said. “I do not want to reduce it to the irresponsible behaviour I just denounced . . . This anger is more profound. It may be our chance.”

The president spoke of single mothers, pensioners and workers who are occupying traffic roundabouts. “Their distress didn’t start yesterday, but we had grown accustomed to it,” he admitted.  “Forty years of malaise are bubbling up.”

The third part of his speech was Mr Macron’s mea culpa. “Doubtless we have not provided a strong and rapid response in the last year and a half. I assume my share of responsibility.”

Alluding to the half-dozen sarcastic comments that earned him a reputation for arrogance, Mr Macron said, “I know that I have hurt some of you by my statements.”

Declaring “a state of economic and social emergency”, he outlined his measures.

The president promised to fight tax evasion and to ensure that the heads of large French companies pay income tax in France. However, he refused to cede ground on the wealth tax on capital investments, whose re-establishment has been a key demand of the yellow vests. During the 40 years the tax was in force, the rich left the country, he said.

“We will not return to our usual lives as if nothing has changed,” Mr Macron promised. “We are at a historic juncture for our country. My only concern is you. My only battle is for you . . . for France.”