Propagated online, the urban myth of marauding Roma has taken on a life of its own 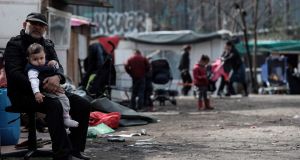 A man holds a child in a camp of the Roma community that was attacked in Bobigny, near Paris, Photograph: Kenzo Tribouillard/AFP/Getty

The first three of 19 people detained on suspicion of attacks against members of the Roma community in the immigrant suburbs of Paris were to appear in court late on Wednesday. Two of the suspects are minors, and all are charged with “wilful violence, arson and participating in a mob with a weapon” on the night of March 25th-26th.

Individuals armed with sticks and stones and baseball bats were involved in at least three separate incidents in Clichy-sous-Bois and Bobigny, according to multiple sources.

On Monday evening, inhabitants of Clichy-sous-Bois gathered in front of the town hall demanding that officials act against the Roma community, after social media relayed rumours that Roma were kidnapping children and young women to cull their organs or exploit them as prostitutes.

About 20 men went to a house squatted in by Roma people, who fled to a supermarket. Police intervened and escorted the Roma back to their squat and then to the Porte de La Chapelle so they could pass the night in safety.

A Roma encampment next to the highway at nearby Bobigny was attacked by men with sticks and knives, who set fire to three vehicles. Police returned and arrested eight people, including two Roma community members, when another fight broke out in the same place later the same night.

Similar incidents were reported in Aubervilliers, Bondy and Noisy-le-Sec.

The attacks have been prompted by numerous false reports on Facebook, Twitter and Snapchat this month. Most include images of a van or truck near a school or park, which is said to be on the prowl for children. The colour of the vehicle varies, from white to yellow, orange or red.

Marie Peltier, a historian who specialises in conspiracy theories, recalled on BFMTV that the paedophile serial killers Michel Fourniret and Marc Dutroux drove white vans. “A fantasy based on fact took root around this banal vehicle,” Peltier said. “Like all disinformation, it needs a symbol to exist.”

In the town of Sarcelles, near Roissy airport, a Facebook video denounced “an organisation, a network, which is trying to kidnap our children to prostitute them and sell their organs”. The same video advocated creating a Facebook page for “vigilant parents” to discuss tracking devices for children. The video was viewed 70,000 times before it was taken down after four days.

At the beginning of the week in Sevran, police intervened to save a Roma couple in a red van parked in a hotel parking lot. A man had posted an image of the van on Snapchat with a text saying “We found the son of a b***h who steals children. Come everyone. Don’t let them out of here.”

The Paris prefecture has posted repeated denunciations of “false information,” but these and other official denials have barely dented the urban myth of marauding Roma.

Patrick Haddad, the mayor of Sarcelles, told France Info radio that “local conspiracy theories are being fanned by social media”. He rejected the rumours on the town’s Facebook page, and posted the denial in local schools.

David Moreira, the police commissioner in Clichy-sous-Bois, warned the towns in his sector to “be careful because a certain hysteria is taking hold”.

The incidents have put the Roma community on the alert for potential further attacks. During the night from Tuesday to Wednesday, Le Monde reporter Allan Kaval visited the shanty town where 250 Roma live in Bobigny, and which was attacked the previous evening. Roma men stood watch in shifts at the entrance to the camp, warming themselves by a fire in a disused metal barrel.

A group called “Voice of the Roma” reported “racist fake news,” adding that “these stereotypes of Roma stealing children go back to the Middle Ages in France.”