Tales of heroism emerge from horror of France terror attacks

Many individuals risked their own lives to save others, or tended to the wounded 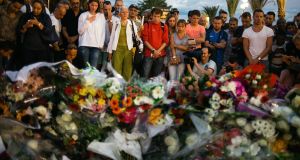 People bring flowers to the site of the terrorist attack in Nice, on July 15th. Some ordinary people in France have reacted heroically, risking their lives by fighting terrorists when they found themselves in the midst of an attack. Photograph: Dmitry Kostyukov/The New York Times

Terrorist attacks in France come often enough that they can seem to be variations on a painful pattern: carnage followed by disbelief, then condemnations, condolences, and shrines of flowers, candles and letters for the dead.

Yet to see the attacks only that way is to miss the one element that might buoy the national spirit: In nearly every terrorist episode here, ordinary individuals risked their own safety to try to halt the attack or to lend a hand to the wounded rather than running away. Some of these local heroes are recognised right away, though others never receive recognition, and some receive it only belatedly.

“What I saw was horrible, people crushed – it had to be stopped,” said a 48-year old man named Franck who would not give his surname even after he was decorated by the city of Nice for his effort to stop the driver of a cargo truck that ran over scores of people July 14th at a Bastille Day celebration.

A worker at the Nice airport, Franck, who was on a motor scooter, decided in a split second to chase the truck and, when he caught up, rammed it – to no avail – and was knocked off. He got up and ran after the truck, managed to climb on to the running boards and began hitting the driver through the open window. As the driver, Mohamed Lahouaiej Bouhlel, tried to shoot Franck, his gun failed and, at the same time, Franck tried to open the door of the truck, then tried climbing through the window, but the driver struck him on the head with the gun and he fell, breaking a rib and badly bruising his back.

Franck said he was satisfied that when the driver was fighting with him, he was not running over more people. “He was concentrating on me; in that moment he could not kill people,” he said. At least two other men made similar, if less prolonged, efforts and also received medals from the city: Alexander Migues, pursued the truck on a bicycle, and Gwenael Leriche, a 26-year-old delivery man, ran after the truck armed with nothing but a penknife and tried to jump onto the running boards as the truck came to a halt.

In Villejuif in April last year, a fitness instructor and mother, Aurélie Châtelain (32) refused to hand over her car to Sid Ahmed Ghlam, who authorities say planned to gun down a crowd at a suburban church. Her refusal ended with both of them being shot in a tussle, and she died. When Ghlam called the police for help, he was arrested. He remains in prison and contends he did not shoot her.

Châtelain received the Legion d’Honneur posthumously after her family and friends pointed out that if those who stopped a gunman presumed to be on the verge of an attack on the high-speed Thalys train running from Amsterdam to Paris deserved France’s highest award, so did she.

The attempted attack on the train occurred almost exactly a year ago, when a shirtless man emerged from a train bathroom with a Kalashnikov assault rifle and a Luger pistol. Three Americans who stopped him have been decorated by France’s president; along with a Briton and a French-American man, Mark Moogalian, who was the first to grab the gunman, Ayoub El Khazzani; Moogalian was shot in the process, but survived. The intervention of the men stopped what could have become a slaughter.

Most recently, in July, Sister Danielle Delafosse overcame her fear after terrorists entered a small church at St-Étienne-Du-Rouvray in Rouen, with the intent to kill people. She ran out of the church, found someone with a phone and had the person call the police, who arrived too late to save the Rev Jacques Hamel (85), who was killed, but perhaps in time to prevent more bloodshed.

While the heroism that gains attention is often the sort that risks the hero’s own life or limb, many who acted in less visible ways nonetheless transcended the moment. They responded with an extraordinary commitment to assist the wounded in circumstances that many would find overwhelming. In Nice, they include doctors, X-ray technicians, nurses and firefighters who worked hours upon hours treating the injured or trying to match lost children with their families.

“I understood I had to choose. I could not open the door to the crowds of people and to those giving first aid, I decided the first priority was the wounded, to do as much as we could for the emergency responders who were trying to save whomever they could,” he said.

In minutes, the firefighters and first-aid workers began carrying the injured – and the dead – into the club to get them off the promenade, which was thick with running, stumbling, screaming people. Soon, two medical helicopters landed just in front of the disco, where the aid workers performed triage, with the most badly hurt airlifted to hospitals nearby.

Some of Thévenet’s security staff, who were trained in first aid, worked alongside the firefighters and emergency responders; a room in the club was set aside for the dead.

Thévenet is not sure when – or even if – business will return, especially because many in Nice know that the dead and wounded lay in rows on the same floor where they would be dancing. But he believes it will. “We will have to find again the party atmosphere, that has been our protein for 11 years,” he said. “It is out of the question to cede it to the terrorists.”

She was on-call the night of the attack, but at home after a relatively quiet day. She had considered going with her daughters to the promenade to see the fireworks, but her plans changed when a friend stopped by. When Rampal’s pager went off, like everyone else, she did not know of the attack, but rushed to the emergency room.

The wounded were already filling the chairs, lying on the floor, some with open fractures – most of them children. More were coming in, some carried in their parents’ arms. She helped with triage, went into surgery, back to triage, working without stopping as 30 young patients, many younger than 10, were stabilised and sent into surgery. Of the 30 children, 28 survived – two died from head injuries and crushed pelvises, she said.

At 7am she went home to shower. “I came in and took my daughter in my arms and held her close to me” – she has two girls, a two-year-old and a nine-month old. She was back at the hospital 90 minutes later.