Coronavirus has hit hardest in southern, Italian-speaking canton of Ticino 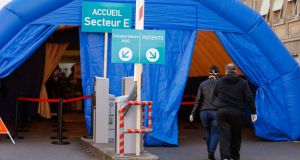 Patients at a screening tent for coronavirus testing outside the University Hospital of Geneva: Swiss travelling abroad have been asked to return home. Photograph: Pierre Albouy

As one of the top 10 countries worldwide most affected by coronavirus, Switzerland imposed an extensive shutdown of public life on Tuesday and began mobilising 8,000 troops to support the healthcare system.

Just three weeks after the first person tested positive for the virus, the number of cases in the country has reached 2,650 with 19 deaths out of a population of 8.5 million. A federal health office spokesman admitted on Tuesday there was a backlog in processing tests and it was proving difficult to provide up-to-date figures.

The latest government advice, delivered by public service announcement in the news bulletins of the state broadcaster on Tuesday afternoon, is for all residents to stay at home unless they need to go out to work, buy food, visit the doctor or pharmacy, or help someone.

Four ministers of the seven-member federal council (cross-party government) gave a press conference on Monday to announce a raft of new measures, including the largest army mobilisation since the second World War. Recently trained soldiers are being recalled and deployed mainly to assist in healthcare, but also in logistics and security.

The army is already assisting in the southern, Italian-speaking canton of Ticino, which has been worst-hit by the crisis so far. Normally, one quarter of Ticino’s workforce are cross-border workers from Italy.

Since an initial ban on gatherings of more than 1,000 people was introduced on February 28th, Switzerland has steadily increased restrictions on social activity. The limit was later reduced to 100. All schools and educational establishments across the country were closed on March 13th.

The latest measures imposed from Tuesday include a ban on all public and private events. Shops, restaurants, hairdressers, leisure and entertainment establishments must close. Exceptions are made for food stores, banks, post offices, garages and petrol stations.

Up to eight cantons out of 26 have imposed more severe measures. Geneva, for example, has limited all private gatherings to a maximum of five people.

Border controls with Italy were reintroduced last week and the same restrictions now apply to France, Austria and Germany. In normal circumstances, more than 325,000 workers from neighbouring countries cross the border daily to work in Switzerland.

Under the new controls, this traffic will still be allowed, though it is declining spontaneously. For the moment, entry into Switzerland is restricted to Swiss citizens, permit-holding residents and those travelling for work purposes. More than 100 smaller crossings have been closed but the main border crossings remain open for goods and transit.

People have been asked to work from home if at all possible and, while public transport is still operating, the government has advised against unnecessary inland travel. Swiss tourists travelling abroad have been asked to return home. The foreign ministry is working to repatriate a large group that have been stranded in Morocco for days.

The bulk of a 10 billion Swiss francs (€9.5 billion) package of immediate aid to the private sector, announced on Friday, has been allocated to cover the salary shortfall for employees whose hours are reduced or stopped due to the crisis.

As the population enters a new phase of stricter measures to curb the spread of coronavirus, the latest message broadcast on behalf of the federal council was clear, “Switzerland is counting on you”.