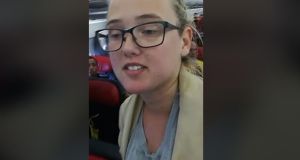 Elin Ersson live-streamed her protest on the flight from Gothenburg to Turkey on Facebook.

A lone student activist on board a plane at Gothenburg airport has prevented the deportation of an Afghan asylum seeker from Sweden by refusing to sit down until the man was removed from the flight.

Elin Ersson, whose Facebook page says she is a student at Gothenburg University, bought a ticket for the flight from Gothenburg to Turkey after she and other asylum activists found out that a young Afghan was due to be deported on it, according to Swedish press reports.

As she entered the plane Ms Ersson started to live-stream her protest in English. The video received more than half a million hits on Tuesday.

Facing both sympathy and hostility from passengers, the footage shows Ms Ersson struggling to keep her composure.

“I don’t want a man’s life to be taken away just because you don’t want to miss your flight,” she says. “I am not going to sit down until the person is off the plane.

Repeatedly challenged by a steward to stop filming, Ms Ersson says: “I am doing what I can to save a person’s life. As long as a person is standing up the pilot cannot take off. All I want to do is stop the deportation and then I will comply with the rules here. This is all perfectly legal and I have not committed a crime.”

When an angry passenger, who appears to be English, tries to seize her phone, she tells him: “What is more important, a life, or your time? . . . I want him to get off the plane because he is not safe in Afghanistan. I am trying to change my country’s rules, I don’t like them. It is not right to send people to hell.”

After a tense standoff, during which the airport authorities declined to use force to eject Ms Ersson, passengers broke into applause when the asylum seeker was taken off the plane.

Swedavia, the company that runs Landvetter airport in Gothenburg, confirmed that an Afghan asylum seeker and three security personnel had left the plane, followed by Ms Ersson.

The incident shines a spotlight on domestic opposition to Sweden’s tough asylum regime. The government is keen to maintain expulsions of asylum seekers as the country heads towards an election in September that is being fought largely on immigration and asylum, with the far-right Sweden Democrats showing strongly in the polls.

Earlier this month an Afghan deportee was released from a flight before it left Gothenburg after he protested loudly on board.

After the Taliban rampaged through a hotel in Kabul in January, killing 22, and a bomb killed more than 100 people , Sweden briefly halted deportations to Afghanistan. However the Swedish Migration Board stands by its assessment that the country is safe for asylum seekers whose applications have been denied.

The board said it expects tens of thousands of deportation cases will be handed over to the police as the country continues to process a backlog of asylum applications after 163,000 people claimed asylum in Sweden in 2015.

Since then Sweden has made it much harder for refugees to get into the country and asylum applications have fallen sharply.

Local media said the man due to be deported on Monday had disappeared but Deutsche Welle reported that he was still in custody and would be deported at a later date. – Guardian