Thai cave soccer team to be ordained as Buddhist novices 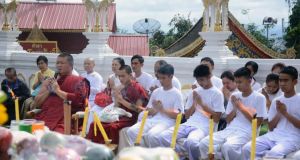 Eleven members of the football team who were rescued from a cave in northern Thailand took their first steps to being ordained as Buddhist novices, a gesture to honour those who took part in their rescue.

The boys, whose ages range from 11 to 16, will live in a Buddhist temple for nine days, the same length of time they were trapped in Tham Luang Cave in Chang Rai before they were discovered by a team of divers.

Their coach, Ekapol Chanthawong , who had already lived as a Buddhist novice for a decade, will be ordained as a monk. One of the boys, 14-year-old Adul Sam-on, will not be ordained as he is a Christian.

The boys’ families had made the pledge to ordain the Wild Boars as a way to show thanks for the efforts that went towards saving them and also to pay respect to the Thai navy seal, Saman Kunan, who died in the rescue operation. The boys will donate their merit to the memory of Saman, which is the highest honour in Buddhism.

For the initial ceremony, which took place at Wat Phra That Doi Wao, the boys wore the traditional simple white robes and looked solemn as they were led in prayers by monks to give thanks for their safe return. Candles were lit and then traditional offerings, such as sweet drinks and fruit, were laid out in front of the Buddha statues. As per tradition the boys will have their heads shaved when they enter the temple on Wednesday.

The rescue effort to save the boys and their coach finally ended on 10 July, having seen divers, caving experts, navy seals and volunteers from around the world unite in efforts to save the boys. The boys recently described how they had drunk water from the cave walls to survive and had tried to dig themselves out after getting trapped in the cave when it became flooded with the monsoon rains.

Since they were discharged from hospital on Tuesday, the boys have been spending time at home. The Thai government has imposed a ban on media speaking to them for 30 days. - Guardian

1 ‘The hellhole says goodbye’: Glee and relief in Europe as Trump departs