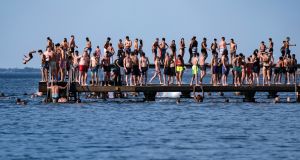 People jump and swim from a jetty in Malmo, Sweden on Thursday during a heatwave with temperatures over 30 degrees. Photograph: Johan Nilsson/TT/AFP/Getty

Swedes are losing trust in authorities’ handling of the coronavirus, as the man behind the country’s light-touch approach called lockdowns a form of madness and political parties demanded the Swedish strategy be reviewed before the next election in 2022.

An Ipsos survey this week for the broadsheet Dagens Nyheter newspaper showed confidence in the country’s management of Covid-19 had fallen 11 points to 45 per cent since April, with backing for the national public health agency down 12 points.

The proportion of respondents satisfied with the centre-left government’s actions in the pandemic also fell to 38 per cent in June from 50 per cent the previous month, while the personal approval rating of the prime minister Stefan Löfven also slid 10 points.

“The differences are big enough that we can say with certainty that there has been a real change,” an Ipsos analyst, Nicklas Köllebring, told the paper. “The view of authorities’ capabilities has taken a clear negative turn.”

The poll confirms a study earlier this month by the pollster Novus which found that only 45 per cent of voters reported a very or quite high degree of confidence in the government’s capacity to handle the crisis, against 63 per cent in April.

Unlike most EU countries, Sweden did not try to shut society down. It closed schools for the over-16s and banned gatherings of more than 50 people, but otherwise relied on Swedes’ sense of civic responsibility to observe physical distancing and home working guidelines. Shops, restaurants and gyms remained open.

Authorities argued that public health should be viewed in the broadest sense, saying the kind of strict mandatory lockdowns imposed elsewhere were both unsustainable over the long run and could have serious secondary impacts including increased unemployment and mental health problems.

“It was as if the world had gone mad and everything we had discussed was forgotten,” Anders Tegnell, Sweden’s chief epidemiologist and the man behind the strategy, told a Swedish Radio podcast on Wednesday. “The case became too many, and the political pressure got too great. And then Sweden stood there somewhat alone.”

But while broadly supported by most Swedes, the policy, which Mr Tegnell has said was aimed not at achieving herd immunity but at slowing the spread of the virus enough for health services to cope, was heavily criticised by many experts as the country’s death toll increased.

Sweden’s 5,230 deaths translates to a toll per million inhabitants of 511, many times higher than the corresponding totals in neighbouring Denmark (104), Finland (59) and Norway (47), all of which imposed strict confinements - but lower than the 650 registered in the UK, Spain’s 606 and Italy’s 573.

Sweden has also been slow to get its testing programme off the ground, with per capita rates significantly lower than many European countries - although the number of people tested for Covid-19 nearly doubled in June, hitting 60,000 last week.

As a result, many European countries now opening up to tourism have barred Swedes from entry until June 30th, while to its considerable annoyance the county’s neighbours have also excluded it from a Nordic travel bubble.

Mr Tegnell conceded earlier this month that the country has had too many deaths - particularly in care homes - from Covid-19, should have done more to curb the spread of the virus, and would “do something in between what Sweden did and what the rest of the world has done” if confronted with the disease now.

But he has also insisted that “the basic strategy worked well” and “based on the knowledge we had then, we feel we made the appropriate decisions”. Mr Löfven has said the country’s overall approach was right but it had failed to protect care homes, where half of all Sweden’s Covid-19 deaths have occurred.–Guardian