Anti-submarine operation was largest since twilight of Soviet Union 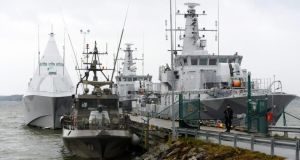 HMS Visby and two minesweepers lie moored at the jetty at Berga marine base outside Stockholm after a military search for a suspected foreign vessel in Swedish waters was called off. Photograph: Fredrik Sandberg/EPA

Swedish authorities have called off their week-long search for a suspected submarine in the Stockholm archipelago.

Military authorities said today that they have ordered naval and amphibious forces to end their hunt for the submarine, though some ground forces will remain involved.

Sweden’s military launched its biggest anti-submarine operation since the twilight of the Soviet Union last Friday after receiving credible reports of foreign underwater activity in the archipelago which extends from the capital, Stockholm, into the Baltic Sea.

Military officials have not accused any country of the suspected intrusion, though most Swedish defence analysts say Russia would be a likely culprit.