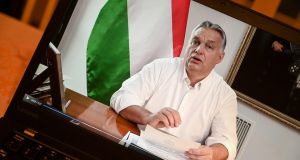 Hungarian prime minister Viktor Orban said experts had warned of ‘a 50-50 chance that the healthcare system would collapse without further restrictions, and we can’t take that risk’. Photograph: Getty

Hungary’s nationalist government has been accused of trying to cement its power and impose its conservative social agenda after proposing a raft of controversial legal changes just as the country entered a partial Covid-19 lockdown.

Critics said the proposals continued his decade-long drive to centralise control and take Hungary sharply to the right, which has led to frequent clashes with the European Union over democracy and the rule of law.

Opposition figures and rights groups argued that the latest legislative gambit showed the government was failing to focus on fighting coronavirus, despite Mr Orban’s admission that it could swamp Hungary’s health system unless swift action was taken.

Five months after Hungary banned gender changes on official documents, justice minister Judit Varga proposed a constitutional amendment stating that the country “protects children’s right to an identity corresponding to his or her sex at birth and ensures an upbringing that reflects values based on Hungary’s constitutional identity and Christian culture”.

The constitution does not allow same-sex marriage, but the amendment would add that “the basis for family relations is marriage . . . The mother is a woman, the father is a man.”

The government also tabled a Bill to allow children to be adopted only by married couples and by single people who receive special ministerial permission – a move that would effectively exclude same-sex couples from the process.

Hungary’s Hatter Society rights group said it was “no coincidence” that proposals which “go against basic international and European human rights” were unveiled at a time when new lockdown rules meant “protests are not allowed”.

A separate Bill would hamper opposition plans to field joint candidates in certain constituencies in the 2022 parliamentary election, and another constitutional change would alter the official definition of “public funds” and potentially weaken anti-corruption controls.

“Viktor Orban has become unworthy of his office once and for all,” said six opposition parties in a joint statement. “We demand that he withdraws these Bills and spends the rest of his time in office without theft and manipulation.”

Katalin Cseh, an MEP for Hungary’s opposition Momentum movement wrote on Twitter: “They should be protecting lives. [Instead] they’re busy with legal chicanery to ‘redefine’ public money, to block oversight from EU and watchdogs. Parents, schools, hospitals, small businesses are hours away from a lockdown – not knowing what will happen. On the government’s agenda: constitutional amendment to fight gender ideology.”

Mr Orban said experts had warned of “a 50-50 chance that the healthcare system would collapse without further restrictions, and we can’t take that risk”.

Hungary reported 3,945 new coronavirus cases and 101 deaths of people with Covid-19 on Wednesday; during the last fortnight, the country has registered the third highest number of Covid-19 deaths per 100,000 people among all EU states.