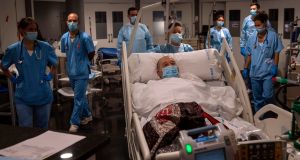 A 60-year-old patient leaves the intensive care unit at the Hospital del Mar in Barcelona, Spain, on Monday. Photograph: AP

Spain passed a grim milestone of recording more than half a million coronavirus cases on Monday, becoming the first western European country to do so amid a steep upward trend that is mirrored in neighbouring France.

Spain added 49,719 new cases in the past week, bringing its total since the start of the pandemic earlier this year to 525,549 infections. Roughly one-third of the new cases and deaths are in the epicentre of the outbreak – Madrid.

After stern restrictions drove the number of infections down this summer, a rebound of the virus is under way in several European countries. Unlike during the height of the previous spike last spring, this rise is concentrated among young people, meaning the mortality rate is significantly lower due to their stronger immune systems.

But authorities have warned that the virus can still have serious long-term health consequences for younger patients.

“Many people will be infected. And some of these people, while they won’t die, will suffer an immediate and severe impact on their health that will likely be long-lasting,” warned the co-founder of Spain’s Institute for Health and Strategy, Rafael Bengoa.

In France, leading epidemiologist Prof Antoine Fontanet called for the adoption of increased distancing and precautions to avoid the need for the imposition of stricter rules in the coming weeks after more than 15,000 additional cases were reported in the country over the weekend.

“If this rhythm continues, we will reach a critical situation in several regions of France in December. It is better to act now, the earlier we act the less strict the measures will be and the fewer will be,” said Prof Fontanet. “If we wait 15 days it will be harder and longer.” Of France’s 101 departments, 28 are now classified as “red zones” with cities including Lille, Dijon and Strasbourg placed on high alert.

The classification of Strasbourg added to the reluctance of many members of the European Parliament to travel from Brussels to the city for a scheduled sitting next week, when European Commission president Ursula von der Leyen is due to give her annual “state of the union” address to MEPs.

In England and Wales dozens of schools have reported coronavirus outbreaks a week since they reopened. An estimated 200 students and 21 staff are in self-isolation in Liverpool following one outbreak, while a school in Suffolk closed its doors after five teachers tested positive.

“The rise in the number of cases we’ve seen over the last few days is largely among younger people. Under-25s, especially between 17 and 21,” said British health secretary Matt Hancock.

“Even though you’re at lower risk of dying from Covid if you’re under 25, you can still have really serious symptoms and consequences,” he warned.

A British government source warned of significant concern the UK could be  “six weeks behind France” in its infections.

In the United States cases are rising in 22 out of 50 states. With more than six million recorded cases, the US is the worst-affected country, followed by India, Brazil and Russia.