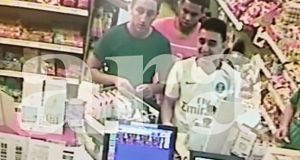 The Catalan interior ministry has confirmed that it was warned by Belgian authorities in March 2016 about Abdelbaki Es Satty, the imam who radicalised and organised the terror cell that killed 15 people in northeast Spain last week.

Hans Bonte, the mayor of the Flemish town of Vilvoorde, said local security forces had emailed an official in the Catalan police to express disquiet about Es Satty.

The confirmation came as new CCTV images emerged of three of the suspects, which appeared to show them laughing at a petrol station hours before they were shot dead by police.

Almost all of the dead men and suspects in the terror cell had been living in Ripoll, where Es Satty had been appointed as an imam two years ago, despite having served a prison sentence in Spain for drug smuggling. He spent the early months of last year in Vilvoorde.

“The imam of Diegem [another Belgian town near Vilvoorde] asked about the man who had moved to Vilvoorde,” Mr Bonte told El País. “He said he acted strangely and told him he’d left Spain because he had no future there and had proclaimed himself imam, though he had no accreditation.”

Mr Bonte said the Catalan official replied on the same day that Es Satty was “not known” to authorities in Catalonia and had no known links to radical Islam, although a person with the same surname had been investigated.

The Catalan interior ministry confirmed the Belgian communication but emphasised that it was “an informal contact” between two people who had met at international conferences.

“It wasn’t an official communication, which would arrive by other channels,” said a spokeswoman for the ministry.

Anti-terrorist sources told El País that the information had not been shared with either the Spanish interior ministry or with the Belgian federal police.

On Wednesday police said the terror cell had created a suicide vest packed with viable explosives and were in the process of making several more when a blast ripped through their bomb factory.

A search of the rubble at the factory in a disused house in Alcanar in southern Catalonia resulted in the discovery of the vest, which had gone unnoticed on Thursday last week when the blast was initially dismissed as an accidental gas explosion.

Es Satty is also believed to have died in the explosion.

Questions are being asked about the Catalan police’s response to the blast, with sources close to the judicial investigation in Madrid suggesting they may have missed an opportunity to uncover the plot before the terrorists struck later that day in Barcelona.

Quoting two sources close to the investigation in Madrid, Reuters news agency said the missed opportunity may have been a result of procedural errors and a lack of communication.

No immediate decision was made to call explosives experts to the scene of the blast, nor was information about it passed to the national police or civil guard headquarters in Madrid, according to the source.

The group had been planning much larger attacks, but the blast forced the suspects to turn instead to using vehicles as weapons.

A Spanish high court judge ordered another one of the four suspects who were arrested over twin attacks in Catalonia last week to be freed on certain conditions, court sources told the Associated Press on Thursday.

The suspect, Salah el Karib, ran an internet cafe in Ripoll. Investigating judge Fernando Andreu had originally asked for him to remain in police custody pending further investigation of his possible role in the attacks.

However, the judge decided that there was not enough evidence to keep Mr Karib in custody, the court source said. Mr Karib will have to hand over his passport and check into court every week.

Another man arrested over the attacks, Mohammed Aallaa, was also released on certain conditions earlier this week while two others were remanded on charges of membership of a terrorist group and murder.

According to the Catalan newspaper Ara, which published the CCTV images, the three suspects that appear in the pictures were regulars at the petrol station and visited four times on the day of the attacks on Barcelona and Cambrils.

Omar Hychami, Houssaine Abouyaaquob and Moussa Oukabir bought bread, eggs and lighters, and appeared to joke with each other just hours before they were shot dead by police along with two other suspects, after driving a car into pedestrians in Cambrils.