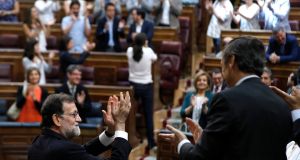 Spanish prime minister Mariano Rajoy receives a standing ovation from his party colleagues at the end of a no-confidence motion in parliament on Wednesday. Photograph: Emilio Naranjo/EPA

Spanish prime minister Mariano Rajoy has comfortably survived a parliamentary no-confidence vote brought against him due to a series of corruption scandals tainting his conservative Popular Party (PP).

The vote was called by the leftist Unidos Podemos coalition, which charged that the PP was unfit to govern following a torrent of investigations and lawsuits engulfing it recently. However, the motion had been widely expected to fail from the outset, because Unidos Podemos, the third-biggest party in parliament, was not able to form an alternative administration.

The Basque Bildu coalition and the Catalan Republican Left (ERC) also supported the no-confidence motion, which received 82 votes in the 350-seat Congress in Wednesday’s ballot. There were 170 votes against and 97 abstentions.

“You will go down in history as the prime minister of corruption,” Unidos Podemos leader Pablo Iglesias told Mr Rajoy during a three-hour speech on Tuesday, in the debate leading up to the vote.

“You bailed out your friends, not the Spanish people,” he added, in reference to the 2012 financial crisis, when several banks were rescued at taxpayers’ expense.

Investigators have been probing the PP’s accounts following allegations that for many years the party kept a slush fund financed by corporate bribes. In a separate case, the former regional premier of Madrid, Ignacio González, was arrested in April on charges of embezzling a public water company.

Meanwhile, former economy minister and IMF managing director Rodrigo Rato has been facing three lawsuits related to his tax affairs and management of Bankia bank. Several other scandals have also been plaguing the party, at a local and national level.

Mr Rajoy, who surprised many by choosing to take part in the debate instead of delegating, responded by highlighting Spain’s economic stability under his supervision and dismissing the credentials of Unidos Podemos as a potential party of government.

“As far as governing this country is concerned, Mr Iglesias, I don’t believe you deserve that honour nor Spain that punishment,” the prime minister said.

This was the third no-confidence motion in Spain’s modern history and each one has failed. Unidos Podemos has faced widespread criticism for calling a vote that always appeared doomed. However, it was an opportunity for Mr Iglesias to present his party as the main opposition force, ahead of the Socialists, who only recently chose a new leader, Pedro Sánchez, after months of turmoil.

The Socialists abstained in Wednesday’s vote, but an apparent thawing of relations between them and Unidos Podemos during the debate hinted that the two parties might be able to work together in the future to prevent the PP from governing – something they already do in several city halls and regional governments.

“We are opening the door to the possibility of changing the government in Spain,” Unidos Podemos congressman Pablo Bustinduy told The Irish Times.

“We think this is the first step towards having that different government that will make the alternative not only possible but a reality.”