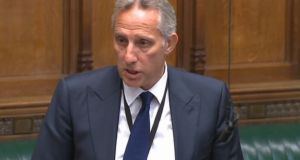 DUP MP Ian Paisley apologises to the House of Commons in London for failing to register two family holidays funded by the Sri Lankan government, which he previously estimated was worth £50,000. Photograph: PA Wire

DUP MP Ian Paisley has made an emotional statement to the House of Commons, apologising for his failure to declare two luxury holidays that were paid for by the Sri Lankan government.

A parliamentary watchdog has called for the North Antrim MP to be suspended for 30 sitting days because he failed to declare the holidays, which were worth more than £50,000.

The trips also included meeting with Sri Lankan governmental figures. The threshold for registering such hospitality in 2013 was around £660. He subsequently wrote a letter to the prime minister arguing on behalf of the Sri Lankan government. Mr Paisley has faced calls to resign his seat and there is a prospect of a by-election as a consequence of the sanction.

At times struggling to maintain his composure, Mr Paisley apologised to the House, to his colleagues in the DUP and to his constituents.

“I take my duties as a Member of Parliament seriously. I believe that I conduct myself with colleagues with integrity and openness, which is why I have such remorse about the matter, as I believe it goes against the grain of who I am, especially how it is portrayed,” he said.

“It is to my constituents, who have sent me here since 2010, that I make the profoundest of all apologies. They have honoured me with unwavering support to be their voice and I hope that they will continue to have that confidence in me in the future.”

When the Daily Telegraph broke the story of Mr Paisley’s holidays in Sri Lanka, where he was accompanied by his family, he initially denied the reports and threatened to sue the newspaper.

The holidays included business-class air travel, accommodation at first-class hotels, helicopter trips and visits to tourist attractions for Mr Paisley and his family.

Mr Paisley said that mistakes made by those in public life were amplified and that they ought to be.

“That is the nature of the job that all of us do and all of us understand that. However, I believe in a politics and in politicians who can admit to human frailty, who can apologise, mean it, and move on, because that is what real life is all about,” he said.

“It is often said that it is how we respond to these challenges in our lives that defines who and what we are, and defines our character and demonstrates to us where the true source of our personal strength rests. The 8th-century prophet Isaiah said, ‘You were angry with me, that anger has turned away, you comfort me.’ I hope to learn that lesson.”

The Commons Standards Committee on Wednesday outlined the sanction for Mr Paisley, son of late DUP founder the Rev Ian Paisley, saying he had committed “serious misconduct” and his actions “were of a nature to bring the House of Commons into disrepute”.

Mr Paisley’s potential suspension would start in September if MPs approve it.

Members who are suspended from the Commons for more than 10 days are open to a recall petition. A by-election would be triggered if 10 per cent of the electorate in Mr Paisley’s North Antrim constituency sign that petition.– PA

1 Ireland could lose out as France lays claim to most of €5bn Brexit compensation fund
2 Q&A: What restrictions are going to be lifted next week?
3 Miriam Lord: The Dáil's answer to John Wayne overcooks the ham slice, by slice, by slice
4 400 – yes, 400! – Irish retailers for all your online Christmas shopping
5 Boy (4) left in hospital for over two years due to Tusla and HSE failings, report says
Real news has value SUBSCRIBE