Snowden ready to testify on NSA in Berlin

Whistleblower testimony conditional on resolution of his asylum situation 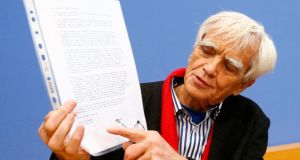 German Greens lawmaker Hans-Christian Stroebele points at the signature on a letter he received from fugitive former U.S. spy agency contractor Edward Snowden, at a news conference in Berlin, November 1, 2013. Stroebele met Snowden in Moscow on Thursday, Stroebele’s office said in a statement, and would give details of the meeting on Friday.

Exiled whistleblower Edward Snowden has said he has no regrets over exposing what he dubbed an “unaccountable system of pervasive surveillance” operated by the US National Security Agency (NSA).

Mr Snowden said he would defy US attempts to intimidate him and indicated that he is willing to testify in Berlin about his years working as a computer contractor and operative in the NSA.

In a letter delivered to German chancellor Angela Merkel, Mr Snowden said he had faced a “severe and sustained campaign of persecution”, and asked for assistance from Germany before he would “co-operate . . . in the responsible finding of fact”.

“I regret nothing,” said Mr Snowden to the Süddeutsche Zeitung daily during a three-hour meeting in Moscow on Thursday. “The US government would like to make an example of me: ‘If you tell the truth, we will destroy you’.”

Sacrifice
His biggest sacrifice was losing “real and regular contact” with his family and friends, he said, but played down his role in one of the biggest leaks of classified information in US history. It was up to experts and “normal citizens to decide . . . how much we profit from this”.

Travelling to Germany would see Mr Snowden’s one-year asylum in Russia, granted in August, lapse automatically. For him to testify in Berlin, Germany’s authorities would, in addition to granting him asylum, have to ignore an arrest warrant for Mr Snowden already filed by the US.

Yesterday a spokesman said the German government would respond to Mr Snowden’s request after it had examined the “complex legal questions” raised by the letter.

Acting interior minister, Hans-Peter Friedrich insisted Germany would “find a way to make a conversation possible” about alleged NSA surveillance of communications in Germany, including the mobile phone of Dr Merkel.

“If the message is that Mr Snowden wants to give us information, then we will gladly accept,” added Mr Friedrich.

“He can explain all of this in a way that only an NSA operative could do,” said Mr Ströbele, “he is a significant witness for Germany . . . and would be prepared to share this knowledge.”

Mr Snowden’s preference was to testify before the US Congress, the MP said. Failing that, he was willing to talk in Berlin once his asylum situation is agreed. “He could imagine coming to Germany if it’s assured that, afterwards, he could stay in Germany or similar country, could stay and is safe,” said Mr Ströbele, a 74-year-old who once defended 1970s left-wing RAF terrorist Andreas Baader.

Mr Ströbele said the idea of the letter, addressed “to whom it may concern” and with no specific references to Germany, had arisen during his talks with Mr Snowden.

US ambassador John Emerson told German television yesterday the US would “deal with” Mr Snowden’s testimony “it if happens”.

A week after revelations that the NSA spied on Dr Merkel’s phone for over a decade, he invited German journalists into the US embassy beside the Brandenburg Gate – but declined requests to see the fourth floor, reported home to an NSA listening post.