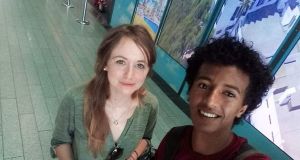 Sally Hayden and Yosi in Luxembourg: Yosi (16) was told by authorities he was 25, perhaps to circumvent fact minors benefit from greater protection.

It’s been one year since I first started getting messages from refugees locked up in Libyan detention centres. Using hidden phones, they risked brutal retaliation to send information about the horrors they were experiencing, and how the European Union is directly implicated. They hoped some good would come from this being exposed to the world, but little has changed since.

Libya, a war-torn country in North Africa, was once a key transit state for people trying to reach Europe. Since 2017, tens of thousands of refugees and migrants have been returned there from the Mediterranean Sea and locked up indefinitely. Most were intercepted by the EU-supported Libyan coast guard, under a deal aimed at stopping migration to Europe.

In detention, they face disease, sickness, forced labour and sexual violence. Tuberculosis is common. Medical care, food and water are lacking. Hundreds of children and minors are among the incarcerated, left without an education. Couples are separated. In one detention centre, at least 22 people died in eight months.

A small number manage to escape.

One of the first people to contact me from a Libyan detention centre was Yosi. He was being held with hundreds of others in Ain Zara, south Tripoli, when conflict broke out in August 2018. Buildings smoked around them, while fighters patrolled with anti-aircraft guns outside.

In April this year, war in Tripoli erupted again. A week into it, one of Yosi’s close friends, a 17 year old called Meron, died after throwing himself into a septic tank behind their detention centre. Meron was traumatised and depressed from all that he had experienced. “Today I hated living in this shameful world,” Yosi told me. “I lost my friend, brother, my everything . . . Meron was a good boy.”

In May, Yosi was evacuated to Italy by the United Nations Refugee Agency – one of a lucky few. He received little help from Italian authorities, and decided to travel on to Luxembourg, after seeing fellow Eritreans sleeping on the streets and worrying that would be his future.

Last month, I finally met him in person.

On my first day in Luxembourg, we talked for more than 10 hours. We walked around the city, through the caving park and by the ancient castles. We went back to the reception centre where he shared close quarters with dozens of other asylum seekers, all waiting for decisions on their cases.

The whole time we were discussing Libya and everything he has gone through. Yosi was tortured by smugglers and abused by Libyan guards. He has many scars: physical and mental.

Yosi doesn’t like being in cars anymore or any small spaces, because it reminds him of being locked up. He jumps at the sound of a slamming door or a dog barking.

A few days before we met there were fireworks, part of some festival. Yosi ran outside, believing the sound was heavy weapons. He wanted to know how far off the missile was.

Eritreans who flee towards Europe, like Yosi, are often underage. They escape before they are forced to begin a programme of indefinite, mandatory military service, which has been likened to slavery by the United Nations.

Though the UN Refugee Agency interviewed Yosi in Libya and gave him papers saying he was 16 years old, Luxembourg’s authorities accuses him of lying. They ordered a medical test designed to measure physical growth, which has been criticised as inaccurate by activists and aid workers. Afterwards, officials told Yosi he is 25.

“What’s at stake is big here: minors benefit from a much bigger protection,” Ambre Schulz told me last week. Schulz works at Passerell, an organisation that gives legal help to refugees and migrants in Luxembourg, including Yosi.

Shortly after my visit, Yosi was moved back to another detention centre, a crushing blow in the country he hoped to make his home. He may be deported back to Italy, where he was first fingerprinted. He’s hoping his case can be reconsidered.

Yosi’s age isn’t the only part of his story that has been questioned. He’s realising most Europeans have no idea of the gross human rights abuses being used to solidify EU borders. After he was taken to hospital in Luxembourg with an ankle injury, from playing football, he told one of the medical staff he has a problem remembering instructions because of the trauma in his past.

He spoke of detention centres in Libya, of torture and violence. He said she didn’t believe him. “She was confused,” he said. “She said like [/laughing/], is it a movie?”