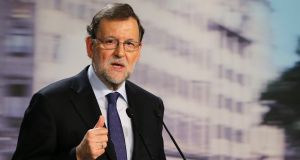 Spanish prime minister Mariano Rajoy said on Monday his centre-right People’s Party (PP) would talk to like-minded rivals in a bid to form a government after an inconclusive election, but his chances look slim without support from left-wing parties.

Mr Rajoy’s PP won the most votes in Sunday’s national election but fell well short of the 176 seats needed for a parliamentary majority, setting the scene for weeks of complex negotiations on building pacts to govern.

The two biggest left-wing blocs - the opposition Socialists and newcomer Podemos (“We Can”) - have already signalled they would not back a PP-led government, complicating Rajoy’s attempts to find allies who will at the very least abstain to let him form a government.

Mr Rajoy said he would approach talks with opponents with an open mind, saying the PP had a lot in common with other parties and appearing to open the door to talks with the Socialists, though he declined to specify what pacts he had in mind.

The PP had a clear democratic mandate to form a government after winning 123 seats, he told a news conference.

“The People’s Party believes it has a responsibility and a mandate to start a dialogue and explore the viability of a stable government that can offer the necessary certainty inside and outside Spain, ” Mr Rajoy said.

Anti-austerity Podemos and fellow newcomer Ciudadanos (“Citizens”), a business-friendly party, entered the mainstream for the first time in the closely-contested election, ending domination by the PP and Socialists stretching back to soon after dictator Francisco Franco’s death in 1975.

The two parties won scores of seats in parliament, tapping widespread anger over a recently-ended economic slump and high-level corruption in the European Union’s fifth-largest economy.

The close vote, which put the Socialists in second place ahead of Podemos and Ciudadanos, makes it extremely difficult for any party to win majority support, raising the possibility of a deadlock that could force new elections in the new year.

Mr Rajoy set a deadline of January 13th for a first round of talks between parties, coinciding with the day parliament is due to resume.

Markets were spooked by the political uncertainty and nervous investors moved out of Spanish assets, sending the country’s shares lower and benchmark bond yields higher.

Mr Rajoy laid out his red lines for a dialogue with rivals, saying he would talk to those that wanted to preserve Spanish unity - a stance that would rule out Podemos, which supports a referendum on independence in the Catalonia region.

The Socialists have also voiced concern over a Catalan split from Spain. But both the Socialists and Podemos said that they would reject a government led by the 60-year-old Mr Rajoy.

“Podemos would not permit a PP government, either actively or passively,” Podemos leader Pablo Iglesias told reporters, meaning that his party will neither vote for PP rule nor abstain in a parliamentary vote on a new government.

Senior Socialist official Cesar Luena said his party would vote ‘no’ to a government headed by Rajoy and the PP.

The two left-wing parties won 159 seats between them in the 350-seat parliament, and with Catalan nationalists likely to join them in opposing the PP, it appears to make it virtually impossible for the PP to construct a majority.

That could open the prospect of a left-wing coalition, similar to what happened in neighbouring Portugal, where the incumbent conservatives won an October election but a Socialist government backed by far-left parties was sworn in.

However, it is not easy for the left-wing parties to build a majority either.

Ciudadanos leader Albert Rivera, with 40 seats, came out in support of a PP minority government, which would negotiate with Ciudadanos, the Socialists and Podemos to support it in votes on different laws.

Mr Rivera said a left-wing coalition of up to 11 parties would not be viable.

“The people voting for our party want a change in Spain, but a change with stability,” Rivera told Reuters TV. “They don’t want to see Spain like Greece. ”

The PP has stressed that protracted negotiations and uncertainty could undermine Spain’s fledgling economic recovery. The country is now one of the fastest-growing economies in the euro zone after a long financial crisis, though unemployment remains above 20 per cent.

Ratings agency Moody’s said the political uncertainty could put the brakes on a long-awaited rating upgrade.

The close result magnifies the importance of small separatist parties from Catalonia, which could try to extract concessions such as the promise of an independence referendum as the price for their support.

Also at stake is whether Spain continues to follow the belt-tightening measures to cut its budget deficit that the PP credits for helping end the recession.

Both Podemos and the Socialists have pledged to slow the pace of deficit-cutting if they gain power.