Commemorations at Stade de France, Bataclan and cafes where 130 people were killed 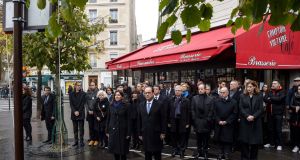 French president François Hollande and mayor of Paris Anne Hidalgo unveil a commemorative plaque in front of the Comptoir Voltaire cafe in Paris on Sunday, during a ceremony to mark the first anniversary of the Paris terror attacks. Photograph: Christophe Petit Tesson/AFP/Getty 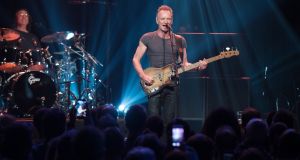 Sting performs at the reopened Bataclan concert hall in Paris on Saturday night. It was the first concert in the venue since the Paris attacks, and survivors and relatives of the victims attended. The set included Police hits Every Breath You Take and Roxanne. Photograph: David Wolff-Patrick/Getty Images

France marked the first anniversary of the November 13, 2015 massacres that killed 130 people with understated ceremonies at the six places where the attacks occurred.

On a cold, damp, grey morning, French president François Hollande and mayor of Paris Anne Hidalgo visited the sites in the same order as the jihadists.

The assassins had divided into three commandos of three men each that targeted the Stade de France, four cafes in the 10th and 11th districts of Paris, and the Bataclan concert hall.

Only one of 10 jihadists, Salah Abdeslam, who served as a driver, survived. He awaits trial in a French prison.

The commemoration started outside the Stade de France in Saint-Denis, where three suicide bombers blew themselves up during the France-Germany football match.

Mr Hollande was attending the match, heard the first two explosions, and took the decision not to evacuate the stadium. Had the gates been opened, more people doubtless would have been killed by the third explosion.

Hollande and Hidalgo tugged on strings and a tricolour fell, revealing a plaque bearing the name of Manuel Dias, the 63-year-old Portuguese immigrant who was Islamic State’s first victim that night. Dias was waiting for the football fans he had brought in a coach from Reims.

A wreath, also blue, white and red, was placed on the ground. Over a loudspeaker, a voice read Dias’s name and called for a minute of silence. With small variations, the ritual was the same at each location.

“At first you tell yourself you can’t go on living,” Mr Dias said. “And then, like everyone else, you get used to it.” Mr Dias was dining in a restaurant when television screens announced that someone had been killed in an explosion at the Stade de France. “Fortunately there’s only one dead,” he told himself. “I didn’t imagine that the only victim was my father.”

In an eloquent and political speech before the French president, prime minister and interior minister, Mr Dias said his father came to France at age 18 and worked in a factory, where he determined to give his children the best education.

“It is fundamental that we advocate tolerance of all differences around us,” he said. His father was “living proof that integration is possible and necessary. He had friends of all nationalities. For him, France was the common denominator we all shared.”

Mr Dias called on his compatriots to “fight stigmatisation and division . . . Integration is the solution . . . By giving the same chances to everyone, we will prevent the resentment of some being transformed into brutality for all.”

The ceremony moved to the Carillon bar and Petit Cambodge restaurant in the 10th district, where 13 people were killed, then to La Bonne Bière, where five died. Video taken from the adjacent Casa Nostra restaurant showed gunmen finishing off wounded people as they lay on the ground.

Twenty-one people were killed and some 60 wounded at La Belle Équipe, scene of the worst attack on a café terrace. The Jewish owner, Gregory Reibenberg, held his Muslim partner, Djamila Houd, in his arms as she died, asking him to take care of their daughter.

The biggest crowd on Sunday was outside the Bataclan, where 90 people were murdered. Three gunmen rushed into the concert hall at 9.40pm, spraying the audience with automatic weapons fire, then picking them off one by one.

A police commissioner who had been called to the Stade de France diverted to the Bataclan, where he ran into the concert hall and shot dead the gunman on the stage. Two other gunman had gone upstairs, where they took some 20 hostages. The siege lasted until 12.18am, when police battered their way in with a large armoured shield.

It took five minutes to read the names of the 90 murder victims. Those of Hélène Muyal-Leiris and Lola Salines have become famous, because Leiris’s widower Antoine and Salines’ father Georges immortalised them in books.

On the night of the massacre, security forces were aghast that president Hollande visited the site before it was secured. Mobile phone records later established that Abdelhamid Abaaoud, who led the cafe attacks, and who was killed five days later, came to the Bataclan to see his handiwork.

The Bataclan reopened on Saturday night with a concert by the British rock star Sting, after a renovation costing millions of euros. All 1,500 tickets sold out in just an hour last week. Many of the concert-goers were relatives of victims or survivors of the attack. Proceeds will be given to the victims’ associations Paris for Life and 13 Novembre Fraternité-Vérité.

Sting called for a minute of silence at the beginning of the concert, saying, “Let us never forget them.” He sang 17 songs in an hour and a half, including the hits Every Breath You Take and Roxanne.

As revealed by the French terrorism expert Jean-Charles Brisard in a report published by the US review Sentinel on November 10, Abaaoud travelled from Syria to Europe at the beginning of August 2015, then used the flow of refugees from Syria to exfiltrate more than 10 Islamic State combatants over subsequent weeks.

Abaaoud’s childhood friend Salah Abdeslam travelled back and forth across Europe, ferrying the jihadists to Brussels while the Paris attacks were planned.

Under the continuing state of emergency, announced by president Hollande on the night of November 13th, 600 weapons have been seized in 4,000 searches. Ninety-five people remain under house arrest.