Questions persist over use of Dutch aid to Bosnia 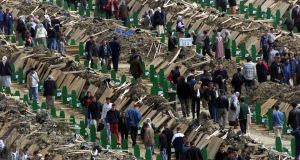 Relatives of 8,000 Muslim men and boys slaughtered in the 1995 Srebrenica massacre walk between rows of coffins next to freshly-dug graves, looking for those belonging to their relatives in March 2003. Photograph: Danilo Krstanovic/Reuters

There have been calls for an investigation into some €120 million in Dutch aid paid to rebuild the Bosnian mountain town of Srebrenica since the massacre there 18 years ago today, amid claims that large amounts of the money have gone missing due to widespread corruption.

More than 8,000 Muslim men and boys taking refuge in a UN “safe haven” were slaughtered by Bosnian Serb forces on July 11th, 1995, and 110 Dutch UN peacekeepers infamously failed to intervene to prevent the atrocity, the worst mass killing on European soil since the second World War.

Government collapse
A damning report in 2002 led to the collapse of the Dutch government and brought to an end the career of then prime minister Wim Kok, who said as he resigned: “The international community has no face and cannot bear responsibility. I can and I will.”

Since then, the Netherlands has accepted that it has “a debt of honour” to the people of Srebrenica and has paid at least €5 million a year to reconstruct the town, to help identify the victims of the massacre and to promote reconciliation.

Now, however, mayor of Srebrenica Camil Durakovic has revealed that much of that money simply disappeared into the pockets of local gangsters – a contention apparently supported by documents from the Dutch embassy in the Bosnian capital, Sarajevo.

Mr Durakovic told the Dutch TV current affairs programme Brandpunt that while the ministry of foreign affairs had been “writing blank cheques”, very little of the Dutch taxpayers’ money had been used on the projects for which it was earmarked.

He claimed some of the money was wasted, some remained in the coffers of the plethora of aid agencies and NGOs still working around Srebrenica, while much of the rest had ended up in the bank accounts of criminals due to “huge corruption”.

Little rebuilding
So far, he said, relatively little of the total of about €120 million had been spent on projects such as rebuilding homes for the families worst affected by the massacre or by the Bosnian War, in which about 100,000 people were killed between 1992 and 1995.

The same programme also produced reports from the Dutch embassy in Sarajevo as recently as 2011 and 2012 which suggested the results were “disappointing” in view of how much money was being spent – and that nobody was willing to tackle the corruption openly.

Socialist MP Harry van Bommel has called for an immediate investigation, criticising the mayor for not reporting the corruption to his local police.

“There are a lot of NGOs and international organisations operating there and, while of course they’re not all corrupt, there needs to be much more transparency. If money isn’t accounted for, the tap should be turned off.”