Q&A: What you need to know about Sunday’s referendum in Italy

What is it about, why was it called, and what are the likely implications of a Yes/No result? 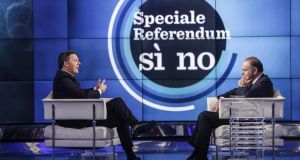 Italy holds a referendum next Sunday (December 4th) on the government’s plan for a comprehensive reform of the constitution.

Opinion polls are banned in the last two weeks of campaigning, however, before the blackout started on November 18th, the final battery of surveys all showed the No camp well ahead, but with up to 25 per cent of voters still undecided.

Here are some central questions thrown up by the ballot.

What is the referendum about and why was it called?

The vote is on prime minister Matteo Renzi’s plans to abolish the elected upper house Senate and replace it with a chamber of regional representatives which will have much reduced powers. The government is also proposing taking back some key decision-making powers from the regions.

Mr Renzi got parliamentary approval for the overhaul, but failed to secure the backing of two-thirds of lawmakers. As a result, because this calls for a change to the constitution, he had to call a referendum to get the reform passed into law.

Critics say the reforms risk undermining democratic safeguards put in place after the second World War to prevent the rise of a new strongman. However, many people are likely to vote No simply to register their dissatisfaction with Mr Renzi, who has struggled to revive economic growth, rather than because they oppose the proposed revamp.

What happens on the political front if No wins?

Mr Renzi has repeatedly said he will resign if the No camp wins, so he will almost certainly offer his resignation to president Sergio Mattarella – though the head of state might urge him to rethink his decision for the sake of political and market stability.

One possibility would be for Mr Renzi to accept a new, limited mandate to oversee an essential electoral reform and open the way for elections in the first half of 2017, a year ahead of schedule.

If Mr Renzi refuses, the president could ask a technocrat, such as economy minister Pier Carlo Padoan, or an institutional figure, such as Senate speaker Pietro Grasso, to lead a new government. As head of the largest party in parliament, Mr Renzi would have a strong say on who is chosen.

What happens if Yes wins?

Mr Renzi’s position would be considerably strengthened within the country and his own feuding party. Some have suggested he might look to cash in and seek snap elections, but one senior government source categorically ruled that out, saying there was too much to do in 2017 – including hosting G-7 world leaders and a European Union summit.

Mr Renzi will also emerge highly bolstered on the European stage. With both France and Germany likely to be distracted in the coming months by national elections, Italy will be in a strong position to push its anti-austerity message in Brussels.

Why would a No result be bad news for Italy’s banks?

Italian banks hold €360 billion euros of bad loans, roughly 40 per cent of all bad loans across the euro zone. A number of lenders are financially shaky, with the third-largest lender, Monte dei Paschi di Siena, set to launch a €5 billion cash call next week. Investors are not expected to sign up if political instability prevails, meaning the state would have to intervene to stave off collapse. Analysts worry a meltdown at Monte dei Paschi could damage confidence in the entire banking system and trigger a full-blown crisis that could take down several lenders.

How are financial markets viewing the risk of a No result?

Financial markets have lost ground recently as the likelihood of a No vote has risen. Given that, a Reuters poll last week said there might be only a muted response to confirmation of such a result, with investors expected to demand an extra 25 basis points in yield to hold Italian debt over its German equivalent if the reform is rejected, and the euro expected to dip 1.25 per cent. However, they did not see much upside in a Yes vote. Clearly any banking crisis could trigger selling on the financial and stock markets, too. The European Central Bank is ready to temporarily step up purchases of Italian government bonds if the result of a crucial referendum on Sunday sharply drives up borrowing costs for the euro zone’s largest debtor, central bank sources told Reuters.

And the 5-Star movement in Italy?

Opinion polls show the anti-establishment Five-Star Movement beating Mr Renzi’s Democratic Party under the terms of Italy’s new, two-round voting system, which would put it in pole position to win the next national elections. However, all parties say that this law must be changed before a general election, so whatever happens on Sunday, Italy will not be heading to a snap election at breakneck speed. Instead, the parties will try to thrash out a new election law and it is certain that the main centre-right and centre-left blocs will want a system that does not favour Five-Star. So the Five-Star’s route to power looks likely to get more complicated after the referendum.

Could the vote deal another setback to the EU?

Italian’s faith in the EU took a battering during the recent financial crisis, and both the Five-Star Movement and opposition Northern League are against the euro currency. The Five-Star has called for a referendum on membership of the single currency, although it does not question membership of the EU. However, a poll published last week by La Stampa found 71.1 per cent of Italians thought leaving the euro would make the economy worse, with just 16.7 per cent seeing it as a boon. The same poll showed 67.4 per cent support for the EU. Given that, the threat to the EU and euro comes more from the possibility of a banking crisis in a heavily indebted country, which analysts say is too big to save and too big to fail.