Pope Francis warns war is ‘madness’ that ‘ruins everything’ 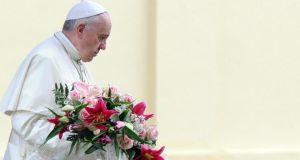 Pope Francis places a floral wreath during his visit to the Austro-Hungarian cemetery in Fogliano Redipuglia. Photograph: Daniel Dal Zennaro/EPA 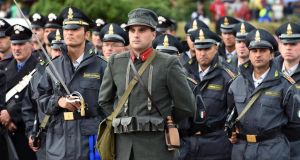 Pope Francis this morning warned that, after a century marked by two World Wars, the world may be in the grips of a third one being “fought piecemeal, with crimes, massacres, destruction”.

The Pope was speaking during a mass at the Italian first World War memorial at Fogliano di Redipuglia, near to Gorizia on the Italian border with Slovenia. More than 100,000 fallen Italian soldiers are believed to be buried in the Fascist-era military graveyard, close to the scene of some of the most decisive battles at the end of the Great War.

Before he went to the Redipuglia cemetery, Pope Francis stopped to pray at a nearby Austro-Hungarian cemetery for fallen soldiers from five countries which fought against the Allies.

In so doing, Pope Francis was underlining that his prayers were for all the victims of all wars.

In his homily, the Pope told the Genesis story of how Cain killed his brother Abel. When the Lord asked Cain where his brother was, Cain replied: “I know not, am I my brother’s keeper?”

The Pope said war is “madness”, that it “ruins everything, even the bonds between brothers”.

He added: “Here lie many victims. Today, we remember them. There are tears, there is sadness. From this place we remember all the victims of every war. Today, too, the victims are many.

“How is this possible? It is so because in today’s world, behind the scenes, there are interests, geopolitical strategies, lust for money and power, and there is the manufacture and sale of arms, which seem to be so important.

“Even today, after the second failure of another world war, perhaps one can speak of a third war, one fought piecemeal, with crimes, massacres, destruction.

“And these plotters of terrorism, these schemers of conflicts, just like arms dealers, have engraved in their hearts, ‘What does it matter to me?’”

Among those concelebrating this morning’s mass were Cardinal Christoph Schonborn of Vienna and Cardinal Josip Bozanic of Zagreb. The mass wa attended by Italian defence minister Roberta Pinotti.

Although the Pope has made several references to the first World War during various impassioned pleas for peace this year, today’s ceremony represents arguably his most important public commemoration of the war.

Redipuglia has personal significance for Francis since his grandfather, Giovanni Bergoglio, was one of thousands of Italians who fought in the trenches near the Isonzo river.

Drafted into the army at the age of 30, Giovanni survived the Isonzo campaign, obtaining a certificate of good conduct and 200 lire at the end of the war. Then, finding it difficult to get work in postwar Italy, he emigrated to Argentina where the future pontiff was born.

1 Why Sinn Féin will not call the State by its name
2 Coronavirus: Questions over Ireland’s readiness for what might come
3 Coronavirus: Irish citizens advised not to travel to Italy’s affected areas
4 Green Party the hottest date in town as government talks begin
5 GP censured over failure to refer suspected meningitis cases to hospital
Real news has value SUBSCRIBE