Poland to welcome 3,500 US troops in Nato deployment

‘Operation Atlantic Resolve’ a response to Russian aggression against Ukraine 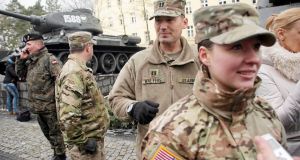 US soldiers arrive in Zagan, Poland, as part of Nato deployment in response to Russia’s stand-off with Ukraine and annexation of Crimea. Photograph: Anna Krasko/Agencja Gazeta via Reuters 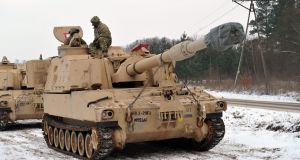 US military equipment is unloaded in Camp Drawsko Pomorskie, Poland, as part of the Nato deployment. Photograph: Marcin Bielecki/EPA

Warsaw will officially welcome the arrival of 3,500 US troops to Poland as part of a Nato military build-up on the bloc’s eastern wall, a move attacked as a provocation by Moscow.

On Saturday, Polish prime minister Beata Szydlo and defence minister Antoni Macierewicz will meet the troops, part of Nato’s Operation Atlantic Resolve, at their new base in the western Polish town of Zagan.

Nato leaders said the deployments, agreed at recent summits, are a response to the Russian stand-off with Ukraine and its annexation of Crimea. Russia has protested that the largest such deployment in peacetime breaches agreements Nato made with Russia following the collapse of the Warsaw Pact.

Last week some 2,500 items of military equipment arrived in Germany and have since been moved in transports across the continent. These include tanks, artillery vehicles and military helicopters. Some 1,000 will be stationed in Poland.

At its Warsaw summit last year, Nato members agreed to deploy to its eastern flank four rotating multinational battalions of some 1,000 soldiers each. Germany, Canada and Britain are sending battalions to Estonia, Latvia and Lithuania. The US will deploy to the region an additional armoured brigade that is usually based in Fort Carson, Colorado.

The arrival of Nato troops in Zagan, 120km from the western border with Germany, was decried as an aggressive step in Moscow, 1,800km away.

“We perceive it as a threat,” said Dmitry Peskov, a Kremlin spokesman. “These actions threaten our interests, our security. Especially as it concerns a third party building up its military presence near our borders.”

Poland shares no direct border with Russia, though the Russian enclave of Kaliningrad – formerly Königsberg – is located between Poland and Lithuania.

Nervousness in Poland and the Baltic countries about Russia’s intentions in its former sphere of influence has prompted years of lobbying from Nato’s newer members for greater military support in the region.

But their long-sought show of support, moved forward into the last days of the Obama administration, comes with a caveat: Will president-elect Donald Trump will maintain the commitment?

In his election campaign, Mr Trump questioned US Nato commitments in Europe, in particular towards members who fail to meet the alliance’s minimum defence spending requirements of 2 per cent of gross domestic product.

In 2015, Poland boosted its spending by almost a fifth to reach the 2 per cent commitment. Estonia also meets the Nato spending commitment, according to World Bank figures, while Lithuania and Latvia spend 1.1 per cent of GDP.

Brig Gen Timothy McGuire, head of US forces in Europe, said the deployment was a show of Nato “strength and cohesion” in Russia’s direction. “The best way to maintain the peace is through preparation,” he said last week.