Speaking in Trump Tower, New York, US President-elect has accused opponents of releasing 'fake news' about him 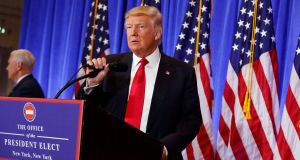 President-elect Donald Trump at a news conference in the lobby of Trump Tower in New York on Wednesday. Photograph: Evan Vucci/AP 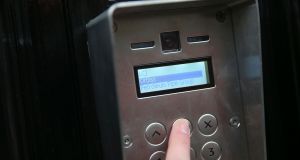 His denials – at least some of them – were emphatic, even by the standards that Donald Trump has come to be judged by. The dossier, he said, was a confection of lies; he compared it to Nazi propaganda; it was fake news spread by sick people.

At his press briefing on Wednesday, the president-elect effectively dared the world’s media to scrutinise the 35 pages of claims, before throwing down a challenge – where’s the proof? Nobody had any. Case closed.

But in the rush to trample all over the dossier and its contents, one key question remained. Why had America’s intelligence agencies felt it necessary to provide a compendium of the claims to Barack Obama and Trump himself?

In both respects, the 53-year-old was in credit. Former colleagues of Steele describe him as “very credible” – a sober, cautious and meticulous professional with a formidable track record.

One former foreign office official who has known Steele for 25 years and considers him a friend, said: “The idea his work is fake or a cowboy operation is false, completely untrue. Chris is an experienced and highly regarded professional. He’s not the sort of person who will simply pass on gossip.

“If he puts something in a report, he believes there’s sufficient credibility in it for it to be worth considering. Chris is a very straight guy. He could not have survived in the job he was in if he had been prone to flights of fancy or doing things in an ill-considered way.”

That is the way the CIA and the FBI, not to mention the British government, regarded him, too. It’s not hard to see why.

An Oxford graduate, Steele was one of the Secret Intelligence Service’s (MI6’s) more eminent Russia specialists. The Guardian understands he focused on Soviet affairs after joining the agency, and spent two years living in Moscow in the early 1990s.

This was a period when Russia, and the breakup of the eastern bloc, was still the prime focus for Britain’s intelligence agencies and a successful spell in the region was a good way to get on.

By all accounts, that’s exactly what Steele did.

And his interest in Russia did not diminish as he continued to rise up the ranks, which at the time included his friend and contemporary Alex Younger – now head of MI6.

Over a career that spanned more than 20 years, Steele did a series of different roles, but always appeared to be drawn back to Russia; he was, sources say, head of MI6’s Russia desk. When the agency was plunged into panic stations over the poisoning of its agent Alexander Litvinenko in 2006, the then chief, Sir John Scarlett, needed a trusted senior officer to plot a way through the minefield ahead – so he turned to Steele.

It was Steele, sources say, who correctly and quickly realised Litvinenko’s death was a Russian state “hit”.

As good as he was, Steele was unlikely to get the top MI6 job, perhaps because his specialisms were not a priority in that period – Russian espionage was taking a back seat to Islamic terrorist and non-state threats.

And, of course, there was money to be made in the private sector – lots of it, particularly in the last two years. He decided to quit the service in 2009.

As the Russian president, Vladimir Putin, exerted influence in all kinds of spheres, so Steele’s background made him hot property indeed. Though he could not travel to Russia, Steele appears to have kept up his contacts and made new ones, using old-school techniques: going out, meeting people, shaking hands, making friends – and paying for information.

With his partner Chris Burrows, he set up the London-based company Orbis Business Intelligence, which was busy and expanding. Their operation would have been a good choice for anyone trying to gather intelligence about Russia and Trump.

It is unlikely that Steele would have had direct contact with the unnamed Kremlin officials who allegedly gave sensitive information on the president-elect. In fact, it’s believed the former spy hasn’t been able to visit Russia for more than 20 years.

Rather, Steele would have tapped up his network of sources deep inside the country, some of them dating from his time there, others cultivated later, British officials suggested.

In turn, these individuals will have had sources of their own. Steele would likely have subcontracted some of his Trump investigation to trusted intermediaries in Moscow, who will have reported back to him via secure channels.

This method of intelligence collection may explain the odd language anomaly in the Trump dossier that emerged into the public eye late on Tuesday.

In a September briefing note, Steele mentions the Alpha-Group, a reference to the consortium headed by the powerful oligarch Mikhail Fridman. The more usual English spelling is Alfa.

Almost certainly, a native Russian speaker wrote the original material, correctly transliterating the Russian “f” as “ph”. It was Steele’s job to collate, evaluate and verify this material before passing it to his American client Fusion GPS, a Washington-based political research firm.

The company had been hired originally by one of Trump’s early Republican opponents before the contract was taken up by senior Democrats.

The foreign office official who spoke to the Guardian on Thursday acknowledged that the Steele dossier isn’t perfect. But he pointed out that intelligence reports always come with “gradations of veracity” and include phrases such as “a high degree of probability”.

“You aren’t dealing with a binary world where you can say this is true and this isn’t,” the official said.

He added: “The strongest reason for giving this report credence is that intelligence professionals in the US take it seriously. They were sufficiently persuaded by the author’s track record to find the contents worth passing to the president and president-elect.”

The CIA and FBI will have taken various factors into consideration before deciding it had credibility. They include Trump’s public comments during the campaign, when he urged Russia to hack Hillary Clinton’s emails. The agencies may also have classified intercept material provided by the National Security Agency and Britain’s GCHQ.

They must, equally, have considered whether some of the claims in the report might have been part of an elaborate Russian disinformation exercise.

“This is unlikely. The dossier is multi-dimensional, involving many different people, and many moving parts,” the official suggested.

Steele’s personal views on Russia are unlikely to be very different from those of his former employers. Or from a former UK ambassador to Moscow, who is understood to have passed the dossier to the Republican senator John McCain, who in turn passed it to the FBI.

SIS has been privately warning that Putin, unchallenged by the west, has grown in confidence and, of course, that the Kremlin has targeted Trump. It would be odd if they hadn’t. The consensus among British securocrats is that “Putin is a wolf . . . and he preys on the weakest sheep”.

But intelligence is not evidence, and Steele would have known, better than anyone, that the information he was gathering was not fact, and could be wrong. In the smoke and mirrors world of counter-espionage, there are few certainties.

Those caveats do not appear on the documents – but it’s what Steele warns any prospective new clients.

Whether he could have imagined that a summary of his work would be used in the way it has is a moot point; Steele did not go to ground in the weeks before Christmas as different US media outlets tried to stand up some of the claims against Trump. He was in London, thinking about where to take Orbis next, eating his favourite tapas and pottering around Victoria, where his newly refurbished office is based.

From Moscow’s perspective, the report’s publication can hardly be counted a success. As a former KGB agent, Putin understands the first rule of intelligence: that special operations should remain secret.

“In the world in which Putin operates, if people can see the strings you’ve failed,” the foreign office official said. “The Russians will be asking: “How the hell did it get out?”

The spotlight is certainly not something Steele was looking for. He is mainly distrustful of the media – he chooses who to speak to, having been let down, so he has confided to friends, by reporters working for a Sunday newspaper.

After a career in MI6, anonymity is something he has prized. He once asked a journalist if he had ever heard of him. The reporter’s reply was a decisive: “No.” Steele was relieved. “That’s the way I like it.”

Now that his cover has been blown, his next steps are uncertain. The fact that Steele is a British citizen, and an outed former MI6 officer, makes him relatively secure from any act of Russian revenge. At the moment, the situation may look bleak for Steele; he’s in hiding, apparently fearful for his life. But things can change.

“This will eventually blow over,” Steele’s friend said. “What you are left with is a effective marketing campaign. He’s a very sober guy but he also has a sense of humour.”