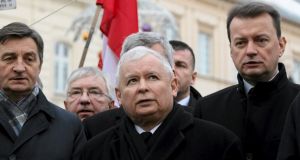 Jaroslaw Kaczynski, (centre), leader of ruling party Law and Justice Party (PiS): said he hoped the new payment would encourage mothers to carry to term even children with no chance of survival, to allow Baptism or a blessing and burial. Photograph: Reuters

Poland’s anti-abortion conservative government has passed a new law promising parents of children born disabled or facing life-threatening disease a once-off 4,000 zloty (€926) payment, in a bid to cut the number of abortions.

Parliamentary backing for the payment, due to come in next year, comes weeks after the government abandoned plans to tighten up Poland’s already restrictive abortion laws.

After public protest, and waning church support, the ruling Law and Justice (PiS) party let fall a Bill brought to parliament by anti-abortion groups, but promised to expedite assistance for women likely to give birth to a handicapped or terminally ill child.

At present families with children requiring full-time care receive 1,300 zlotys (€300). PiS leader Jaroslaw Kaczynski said he hoped the new payment would encourage mothers to carry to term even children with no chance of survival, to allow Baptism or a blessing and burial.

That has outraged women’s groups, who see the “For Life” Bill as an attempt to tighten by the back door Poland’s abortion status quo, dating from the 1990s.

This bans terminations except when the woman’s life or health is threatened, when the pregnancy is the result of rape or incest or where the foetus has no chance of survival.

About 1,000 official abortions take place annually in Poland under these rules, though the unofficial figure is estimated at 100 times that. Many women go abroad or to a larger city to end a pregnancy, complaining it is often impossible to find doctors willing to perform even legal terminations in their locality.

With a nod to its anti-abortion supporters and Poland’s influential Catholic church, the PiS administration says many of the legal abortions are performed on foetuses with conditions like Down syndrome, a trend they hope the new payment will reverse.

On Monday, a Polish regional hospital fired eight staff – including a senior doctor, nurses and a midwife – after they reportedly refused to assist a woman, pregnant in her eight month, who eventually gave birth to her dead baby on the hospital floor.