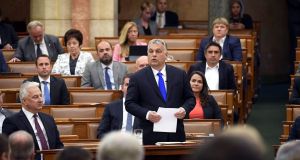 Hungary is no longer a democracy as a consequence of power grabs by the authoritarian government of prime minister Viktor Orban, an NGO that tracks freedoms has found, triggering calls for urgent action by the European Union to uphold the rule of law.

Freedom House, which monitors democracy in 29 countries, said the Hungarian government had “dropped any pretence of respecting democratic institutions” by manipulating the electoral playing field, harassing civil society organisations, and taking over much of the media.

Mr Orban’s government now has the power to rule by decree indefinitely, through an emergency law passed in response to the coronavirus pandemic.

“Hungary’s decline has been the most precipitous ever tracked,” since it began monitoring in 1995, Freedom House wrote in its report. It said the country was no longer a “semi-consolidated democracy” and was now classed as a “hybrid regime”.

Attacks on democratic norms in Poland, where the ruling Law and Justice party is engaged in a campaign to rig the judiciary, meant it was not far behind, the report found. It noted that influencing campaigns by Russia and China had had a destabilising effect, with democracy on the wane across central Europe and the Balkans.

It accused European countries and institutions and the US of failing to defend democratic norms, saying “neither Poland nor Hungary has faced repercussions for damaging the rule of law at home”.

The report sparked calls for European countries and institutions to do more, with warnings that inaction undermined the EU’s founding principles of democracy and rule of law.

“Why do other EU countries and the European Commission sit on their hands?” asked the Belgian politician Guy Verhofstadt, an MEP in the liberal Renew Europe group.

The European Commission can sanction countries for breaching the bloc’s core values, but this can only be done if it is approved by supermajority votes by the European Parliament and European Council, which is made up of national leaders. Regional support for Hungary and Poland, and among right-wing parties in the parliament, makes this difficult.

When asked about the report, a European Commission spokesman said it was in dialogue with member states and was drawing up a report on the rule of law and an action plan for democracy. But he avoided mentioning Hungary or Poland by name.

“We are monitoring the emergency measures taken by member states to address the health crisis. Those measures cannot come at the expense of fundamental rights,” the spokesman said.

With the EU budget currently under debate, there have been some calls to make EU funding conditional on respect for the rule of law, and for member states to isolate the Hungarian government politically by speaking out against it.

Mr Orban’s Fidesz party has been suspended, but not expelled, from the European People’s Party, the pan-European political group in the European Parliament that includes Fine Gael.