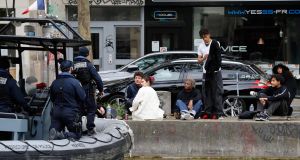 Police talk to people sitting beside the Canal Saint-Martin in Paris. The police had to intervene in the same area earlier to break up groups of people violating the rules with celebratory gatherings that prompted the interior minister to outlaw alcohol consumption on all the city’s canal and river banks. Photograph: Getty Images

Parisians have been banned from drinking alcohol on the banks of the Saint-Martin canal and the Seine river after police were forced to disperse crowds just hours after an eight-week coronavirus lockdown was eased.

Many city dwellers stuck in flats without balconies, terraces or gardens for almost two months turned out on Monday evening to celebrate.

Photos quickly circulated of unmasked revellers gathering by the water in the French capital. On the orders of the interior ministry, Paris’s police prefect issued a ban, saying it “deplored” having to do so in an indignant press release reminding everyone that the success of the deconfinement rested on “the principle of each citizen’s individual responsibility”.

“Barely a few hours after the lifting of the lockdown, dozens of people gathered without respecting social distances and the health recommendations that have even so been hammered home for the past few weeks,” the press release said.

“The prefect of police deplores the fact that, on the first day of deconfinement, he has had to take measures to prohibit the consumption of alcohol on the public highway.”

“The success of the deconfinement depends on everyone’s prudence and civic-mindedness,” he wrote on Twitter.

In another blow to city-dwellers, the health minister, Olivier Veran, ruled out reopening the city’s parks and gardens. The mayor of Paris, Anne Hidalgo, had requested people be allowed to use the open spaces that have been closed since March 17th.

“No, we will not reopen the parks and gardens in Paris, in the Île-de-France and in regions that are classified as red [where the virus is still circulating] because it can be extremely tempting with the sun that we have today for people to regroup too much and not respect the 10-people limit as well as social distancing,” Mr Veran told reporters.

The government has divided

France into green and red areas, with Paris and three other “red” regions seeing a more limited relaxation of the rules.

Mr Veran added: “It’s not over. The virus continues to circulate. In view of yesterday’s images, one can understand, but this can be dangerous.”

French police and gendarmes are going to be busy over the next three weeks despite the end of lockdown.

Although the French no longer need a sworn declaration to leave their homes, a new rule is being introduced until July 10th that nobody can travel more than 100km from their main home “as the crow flies” outside their département without a “compelling” professional or family reason.

This will require people who are planning a long journey to carry a new sworn declaration, giving one of seven reasons. The document can be downloaded on a telephone.

The government has published an online tool to calculate 100km from home. Ministers and officials have already warned French citizens not to plan faraway foreign holidays this summer, suggesting people should think about rediscovering their own country. – Guardian