Sudden deterioration in weather conditions blamed for the deaths 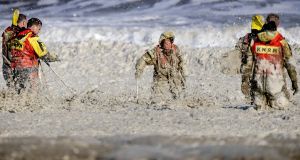 The Netherlands is in shock after the bodies of five surfers, all believed to have been in their 20s or 30s, were recovered from the North Sea following a two-day search-and-rescue operation that brought several others ashore alive.

The dead are believed to include both men and women, all experienced local surfers familiar with the stretch of coast at Scheveningen, near The Hague, where the alarm was raised when winds picked up as watersports enthusiasts prepared for the summer season.

Local people said about 10 surfers were in the water at Noordelijk Havenhoofd, just inside Scheveningen harbour, on Monday evening, when they appeared to have been surprised by a sudden deterioration in the weather, including high winds and crashing waves.

“Some seemed to have been hit by a particularly big wave and were flushed out in the foam ahead of it,” said one onlooker.

“There was foam everywhere. In these situations being caught in the foam is like being caught in an avalanche. It’s impossible to know where you are and which way is up.”

Another said he had been given a lesson by one of the missing surfers just days ago. “They were all very experienced people, in the water almost every day. They knew the sea around here inside out.”

The emergency services reported strong winds and rough seas when they were alerted at 6.45pm on Monday, but said there were still some people in the water who had to be warned to leave the search area immediately.

“A combination of a strong northerly wind and a strong sea current because of the spring tide made this a very tricky and dangerous rescue operation, said a spokesperson for the lifeguard service, KNRM.

Although accounts vary, as many as seven surfers appear to have been pulled from the waves by rescue teams who used a low-flying helicopter to blow foam off the surface of the water so that four high-speed lifeboats could see those in difficulty.

Two of those recovered from the water were declared dead after attempts to resuscitate them on the beach failed. Others were taken to hospital by air ambulance before the search was called off as darkness fell.

When the rescue operation resumed at 5.30 on Tuesday morning, with families and friends watching from the shore, hopes were dashed that some of those still missing might have climbed from the water on their own.

Two bodies were recovered in quick succession and a third was identified mid-morning, bringing the total death toll to five.

The mayor of The Hague, Johan Remkes, said that while it was too early to say what had caused the tragedy there would be a full investigation.

In a separate incident, a 28-year-old man was killed while kite surfing off the Zeeland coast near Den Bosch at the weekend. Rescuers said he was caught by a gust of wind and dashed against a concrete post of a beach house.