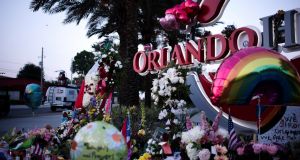 A makeshift memorial set up for victims of the Pulse nightclub shooting near where the attack occurred on Sunday morning. A total of 49 people were killed in the attack. Photograph: Hilary Swift/The New York Times

The investigation into the Orlando nightclub massacre is looking at what role the wife of gunman Omar Mateen may have played in assisting him but Florida state officials refused to speculate on charges that might be brought.

Noor Salman, Mateen’s second wife, reportedly tried to talk her husband out of his plans to attack the Pulse gay nightclub in Orlando but may have assisted him in scouting out the venue.

Mateen entered the club in the early hours of Sunday morning as more than 300 patrons enjoyed a Latin-themed night and opened fire over three hours, killing 49 people and injuring 53. Most victims were gay and Latino – 25 of the people injured remain hospitalised; six are still in a critical condition.

Reuters reported that a federal grand jury had been convened with a view to bringing charges against Mateen’s wife, though US law enforcement officials told media on Wednesday that no charges were pending.

Lee Bentley, a US attorney in Florida, said that he it would be premature to speculate on any charges that might be brought.

He said that there was no evidence to suggest that Mateen planned to attack any target other than Pulse.

Witnesses have said that Mateen visited Pulse a number of times over the previous three years and was a patron at the club, and that he engaged in communications with men on gay dating apps and chatrooms.

FBI agents are interviewing men who claim to have had contact with Mateen online or in person, examining whether Mateen was gay and whether self-loathing about his repressed sexuality, rather than his declared allegiance to foreign militant extremists, was a motive in carrying out the worst mass shooting in modern US history.

“This was an act of violence born out of hate that inflicted terror on an entire community so I would call it a hate crime, I would call it terrorism – it is both,” Mr Hopper told reporters.

Further details emerged about the behaviour of the gunman during the massacre and three-hour hostage stand-off.

Mateen called the 911 emergency dispatcher three times, a local TV news station and a friend to say goodbye during the massacre.

Matthew Gentili, a producer for News 13 TV station in Florida, said that he answered a phone call to the station’s newsroom about 45 minutes after the shooting began from a man identifying himself as the gunman.

Speaking at a campaign rally in Atlanta, Mr Trump called for safe zones to be built for refugees “over there”, reiterating a call for protected areas in Syria to prevent the flow of potentially dangerous migrants into the US.

A day after the Orlando attacks, the New York billionaire proposed suspending immigration to the US from areas of the world with “a proven history of terrorism”.

At an event in Virginia, Mrs Clinton hit back at Mr Trump’s proposals and claim on Monday that Mateen was born in “Afghan”.

“He was born in Queens, New York only miles away from where Donald Trump was born,” she said.

The former US secretary of state criticised Trump’s response to Orlando as not just wrong but dangerous.

“Not one of Donald Trump’s reckless ideas would have saved a single life in Orlando,” she said.

“It is just one more example of how he is temperamentally unfit and unqualified to be commander in chief.”