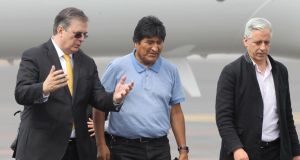 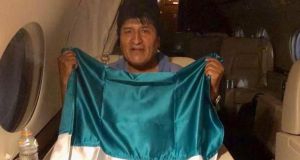 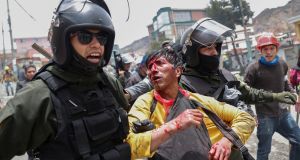 Bolivia’s former leader Evo Morales landed in Mexico on Tuesday pledging to stay in politics as security forces back home quelled unrest over the long-serving leftist’s resignation and opponents sought an interim replacement to fill a power vacuum.

Thanking Mexico’s government for “saving his life”, Mr Morales arrived to take up asylum in the country and repeated his accusation that his rivals had ousted him in a coup after violence broke out following a disputed election last month.

“As long as I am alive, we will remain in politics,” Mr Morales told reporters in brief comments after disembarking the plane to be met by Mexican foreign minister Marcelo Ebrard.

Dressed in a short-sleeved blue shirt, Mr Morales defended his time in government and said that if he were guilty any crime, it was of being indigenous and “anti-imperalist”.

Mr Morales was then whisked away in a military helicopter, television footage showed. Mexican officials have not said where he will stay, citing security concerns.

Mr Morales arrived in a Mexican air force aeroplane from the central Bolivian town of Chimore, a stronghold of Morales supporters where the country’s first indigenous president retreated as his 14-year rule imploded.

The departure of Mr Morales, the last of a wave of leftists who dominated Latin American politics at the start of the century, came after the Organization of American States declared on Sunday that there were serious irregularities during the October 20th vote, prompting ruling party allies to quit and the army to urge him to step down.

Opposition deputies wanted to formally accept Mr Morales’s resignation and start planning for a temporary leader ahead of a new vote. But their plans looked at risk as Mr Morales’s Movement for Socialism said it would boycott the meeting.

Residents of the capital La Paz, rocked by protests and looting since last month’s election, said they hoped politicians would succeed in finally restoring order. “Democracy has been at risk and hopefully it will be resolved today,” said resident Isabel Nadia.

Mr Morales’s flight out was far from simple.

Takeoff was delayed, with supporters surrounding the airport, then the aircraft was denied permission to fuel in Peru, Mr Ebrard said. So it stopped instead in Paraguay before arriving in Mexico City just after 11am local time (5pm Irish time).

“His life and integrity are safe,” Mr Ebrard said, tweeting a photo of Mr Morales alone in the jet with a downcast expression, displaying Mexico’s red, white and green flag across his lap.

In a region divided along ideological lines over Mr Morales’s fall, Mexico’s leftist government has supported his accusations of a coup.

In La Paz, roadblocks were in place after soldiers and police patrolled into the night to stop fighting between rival political groups and looting that erupted after Mr Morales’s resignation.

The charismatic 60-year-old former coca leaf farmer was beloved by the poor when he won power in 2006. But he alienated some by insisting on seeking a fourth term, in defiance of term limits and a 2016 referendum in which Bolivians voted against him being allowed to do that. – Reuters

1 RTÉ receives complaint from union after ‘issue’ with spokeswoman’s accent
2 Election 2020: Fine Gael and Fianna Fáil set to reveal spending plans worth billions
3 Clontarf tenant says her garden was ‘destroyed’ without warning by Irish Rail
4 Fianna Fáil election candidate was disqualified from being company director
5 How to get through the health insurance maze
Real news has value SUBSCRIBE