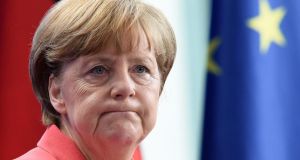 German chancellor Angela Merkel at the press conference in Berlin. Merkel said she is prepared to hold talks with Athens even after Greece’s planned referendum next weekend. Photograph: EPA/ Wolfgang Kumm EPA/Britta Pedersen

Granted, the string quartet played Bach and not Nearer My God to Thee but the Titanic mood in Berlin was unmistakable.

With Greece hanging in the euro by a thread, the celebration for Germany’s dominant political party felt like a living wake for its proudest political achievement: European integration.

Finance minister Wolfgang Schäuble, just two years older than the CDU, was a grey and shrunken figure in his wheelchair, looking like he’d aged a decade after five EU crisis meetings in the last week.

For a bleary-eyed Chancellor Angela Merkel there was one small mercy yesterday: Helmut Kohl’s poor health meant she was spared her mentor’s cool gaze and considerable shadow as she took to the stage.

As she looked out over the audience packed into Berlin’s E-Werk, once an electricity substation and then a techno club, she staked out the CDU’s unique selling point as the Europe party of German politics. Under CDU leadership German unity and European unity had been fused as two sides of the same coin, she said, just as another coin – the euro – is a symbol of European unity.

First: the euro is more than just a currency and is held together as it is by mutual trust of EU members.

Second: assisting a euro member in crisis means balancing solidarity from other members with a state’s own rescue efforts. These are two sides of the same euro coin, she said, and striking agreement will always be a matter of compromise.

The German leader’s final message: even at this 11th hour, she will not risk the euro’s long-term credibility by accepting a lazy compromise on Greece that sacrifices these give-and-take principles of mutual solidarity and individual euro member responsibility.

“Time and again comes the question: can we file away our principles just this once? No, we cannot,” she said.

Dr Merkel faces the greatest dilemma of her career: damned if she saves Greece in the euro, damned if she doesn’t. Her domestic critics, from the hard left to the conservative right, are coalescing into a united anti-bailout front. And her nervous backbenchers are feeling the heat from their voters.

Afterwards Dr Merkel headed back to the chancellery where she and Dr Schäuble briefed opposition leaders on the last days of failed talks, frantic phone calls and high-stakes brinkmanship.

“A referendum is absolutely legitimate but it has to be glass clear that what’s being decided on is, at heart, a question of yes or no in the euro,” he said.

Taking a milder line, Dr Merkel said she had “mixed views” about Sunday’s referendum. No one in Europe would try to influence the opinion of the “responsible citizens and proud people” of Greece before Sunday, she said, nor was Berlin “closed” to the idea of further talks.

But, though “not closed” to further talks, she saw no reason for another crisis summit this week. With an eye on today’s IMF deadline, she said there was “no legal basis” for any EU bridging loans for Greece yet when its existing programme expires at midnight tonight.

The third act in Berlin yesterday: a confrontation in the Bundestag between Dr Merkel and mutinous backbenchers from her own party and also the SPD.

Both the CDU leader and her finance minister insisted that Germany’s exposure in Greece, though considerable, was manageable. Germany’s contribution to EFSF bailout fund loans total €53 billion, with repayment due from 2020. Add in IMF and ESM shares, however, and that exposure soon tops €80 billion.

Dr Schäuble told MPs that, if Greece defaults, the financial burden would have a “limited effect . . . spread out over many years’ budgets”.

As the clock ticks down to Sunday, SPD officials say they want to see fresh elections should Greek voters ignore the government’s No recommendation.

Senior CDU officials say that, should Greek voters back the EU-IMF offer, they expect Mr Tsipras to head a national unity government and reopen talks with Brussels.

As Dr Merkel faces into a week that will decide her political future – and her legacy, it appears the Greek crisis is hurting her more than her party for the first time.

Her popularity has dropped nine points, according to a poll in Der Spiegel, but she is still riding high at 68 per cent after a decade in office – half of which has been in crisis mode.