Migrants may be using Cherbourg-Rosslare as ‘new route’ to UK 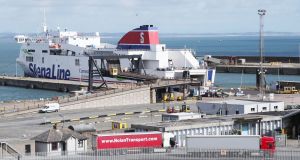 Rosslare Europort in Co Wexford, where 16 people were discovered in a sealed trailer on a ferry sailing from Cherbourg. Photograph: Niall Carson/PA Wire

Police in France have said migrants may be favouring “a new route” to Ireland via the port of Cherbourg because controls there may not be as rigorous as elsewhere.

“We have an endless flow of people trying to reach the UK, and perhaps now Ireland,” said a police source, who was speaking a day after 16 people, believed to be Kurds, stowed away in a trailer on a Stena Line ship which sailed from Cherbourg to Rosslare, Co Wexford. All have asked for asylum in Ireland.

There has been speculation that migrants determined to reach the UK might find it easier to travel to the Republic and cross overland into Northern Ireland.

“If Cherbourg is the new route to Ireland, we haven’t yet put in place the same controls that exist in Calais, which is the most common path to England, ” the police source said. “This is the first time I have heard about Cherbourg and trucks. I’ve never seen that. Obviously we will tighten our controls.”

Unlike Calais, Cherbourg does not fall under the 2003 Touquet accords between France and the UK. Under the agreement, the UK Border Force (UKBF) participates in immigration checks in Calais. The UKBF is not present in Cherbourg.

No ships travel from Calais to Ireland at present, but Jean-Marc Puissesseau, president of the port of Boulogne Calais, said he wants to establish direct freight lines from Calais to Dublin and Cork.

About 200 security personnel are assigned to stop migrants travelling through Calais port to the UK. They are “98-99 per cent successful,” Mr Puissesseau said.

“We check every truck three times,” he said. “While they’re waiting to enter the port, we go around with sniffer dogs. Then there is the heartbeat check. When there’s a refrigerated lorry we stop it and we make the driver or drivers get out.

I promise you the checks are rigorous. Lorries are supposed to have a lead seal. If the seal is broken, we check inside

“We put a sensor on different places on the chassis. It’s strange that a heart can transmit so strongly, but it does. That’s how we tell if there are migrants inside. We detect them fairly often and we call the police.”

Before the lorries drive onto ferries in Calais, guards from the UKBF do a second check with sniffer dogs, Mr Puissesseau said. “We have three checks because we are under the Touquet accords which requires us to do them. These controls do not exist in Cherbourg. Perhaps they do not have the same means we have, which may explain how people could stow away.”

Dominique Louzeau, the president of the port of Cherbourg, said checks there “are made with the greatest rigour,” but he could not say what those checks are.

A senior source at Cherbourg port said the entire perimeter is surrounded by 2.2 metres of barbed wire, and that sniffer dogs are also used there. “I promise you the checks are rigorous. Lorries are supposed to have a lead seal. If the seal is broken, we check inside. We have teams of police dogs and every lorry is checked.”

The same migrants are caught over and over, the source said. “They try again, day after day. It’s inhuman. It’s shabby. I’ve talked to the young ones and I have empathy for them. Europe needs to stop the wars. We need to stop selling weapons.”