Immigration barely figures in debate ahead of Sunday’s election 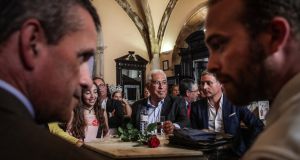 A Socialist election campaign rally is ending in Santarém, a town north of Lisbon. Prime minister António Costa concludes a rousing speech to supporters with the words “Viva Portugal! ” (“Long live Portugal!”). The national anthem starts to play through loudspeakers and those present sing as a large Portuguese flag is projected on to a screen.

Costa, like Leo Varadkar, is a moderate, pro-European of Indian heritage – his father had roots in the Portuguese colony of Goa – who leads his country despite having never won a general election. But the Irish comparison does not end there: Portugal and Ireland are among the only European Union nations without a significant right-wing populist force (the others are Luxembourg and Malta).

Although patriotic symbolism is frequently used at mainstream political events such as this one in Santarém, nationalism and extremism are showing no signs of making inroads in Portugal’s political arena.

“Portugal is a country where populism isn’t a vote winner,” António Guterres, the UN secretary general and former Portuguese prime minister, said in 2017 and that appears to remain true going into this Sunday’s election.

The centre-left Socialists have been leading polls, ahead of the centre-right Social Democratic Party (PSD), followed by the Left Bloc, the Communists and another centre-right party, the People’s Party (CSD). Costa’s lead has been shrinking, making his hopes of securing a majority, after four years of requiring the support of parties to his left, look increasingly fanciful.

The biggest novelty on the political landscape recently has been the rise of the environmentalist People, Animals and Nature party (PAN). Its success has eclipsed the National Renovation Party (PRN) and Chega, far-right forces which are both polling below 1 per cent.

One of the reasons for the far right’s failure is immigration, which remains a marginal issue. Portugal, on the western periphery of mainland Europe and with lower wages than many of its neighbours, has received relatively few migrants and refugees. A 2017 Eurostat report showed that among EU members, only Slovakia had fewer migrants per thousand inhabitants than Portugal.

“Identity and immigration is not really discussed in the Portuguese political system,” says Marina Costa Lobo, a political scientist. “The extreme right parties that tried to exploit [anti-immigrant] feelings have not been successful.”

Instead, public services and the economy tend to dominate political debate.

Several years ago, Portugal’s precarious economic situation appeared to have primed it for a major political upheaval. It was one of the EU members that was hardest hit by the euro-zone crisis, requesting a €78 billion bailout in 2011 as unemployment soared and GDP shrank. The centre-right government of the time implemented the unpopular austerity prescribed by the so-called troika of the International Monetary Fund, European Central Bank and European Commission.

But it was existing parties on the hard left which channelled the growing anti-EU feeling.

“The troika plan was taken up by right-wing parties,” says Pedro Filipe Soares, a member of parliament for the Left Bloc. “When people didn’t like the austerity they chose left-wing parties.”

In 2015 the Left Bloc became part of a three-way governing partnership, with the Communists and Socialists, which brought public finances under control while introducing social-oriented measures. That socioeconomic balancing act, along with the EU’s softening stance on austerity, has helped to restore enthusiasm for the European project.

A 2018 European Parliament poll showed that 78 per cent of Portuguese believed their country had benefited from membership of the bloc, one of the highest numbers in the study and suggesting that the hostility to the EU that was stirring during the troika years has mainly melted away. The Left Bloc, meanwhile, now takes a less adversarial view of the EU.

However, when explaining Portugal’s lack of extremist politics, some look further back, to the country’s own four decades of right-wing dictatorship which ended in 1974 with the peaceful Carnation Revolution.

Soares believes that the poverty and repression of the dictatorship remains fresh in the minds of the Portuguese.

“Extreme right parties are not feasible while we have a memory of fascist rule in the country,” he says. “The memories of the fascist time are not good memories for our people, so if you have an extreme right-wing party associated with that memory, there won’t be a space for them in our politics.”

Although a 2007 referendum allowed liberalisation of abortion and a 2010 law introduced same-sex marriage, social conservatism is strong in many parts of Portugal. Yet political scientist Pedro Magalhaes believes the dictatorship has handed a “patrimony of illegitimacy” to the right when it strays too far from the mainstream, particularly on issues such as immigration. It is a phenomenon which has been less noticeable in neighbouring Spain, where the Vox party has emerged.

“Even though there are segments of the population that can be extremely conservative, when you look at public discourse, public agenda, or the media, when somebody comes out with [an extreme] message it is immediately delegitimised,” he says. Costa Lobo concurs, saying that anti-immigrant attitudes, for example, are common among ordinary Portuguese but have been kept out of the political arena.

Some observers believe that simmering anger at corruption, which has been a problem in politics, could fuel a far-right surge in the future. In the meantime, Portugal’s political class is happy to see their country in the select club that has so far resisted the populist siren call.