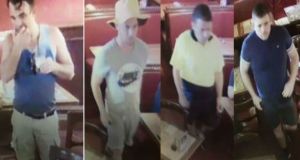 A number of Irish tourists who are accused of scamming and stealing from people on Australia’s east coast are being sought by police.

Queensland police released images of a number of men and women who they say are “all believed to be tourists from Ireland” and are allegedly operating between Brisbane and the Gold Coast.

Police say the tourists have been “working in groups” stealing goods and money from shops and not paying for food or drinks at restaurants by claiming to have found glass or hair in their food.

One group of three women with small children is said to be seen using prams and handbags to hide stolen goods. They also use a tactic of disruptive and aggressive behaviour to distract and intimidate staff, police say.

The investigation is focusing on 12 offences which have occurred since January and involve nine people.

One selection of CCTV images shows a group of four men who allegedly left a Brisbane restaurant without paying for their food after they claimed to have found hair in their meals.

Another group of five men, who are photographed on the Australian police website, are accused of offering discounted repairs on tarmac driveways and roofing but providing sub-standard services or failing to show up.

Detective Tony Fleming said the groups are targeting small businesses and the elderly.

“They are good at creating diversions and distractions to either steal goods or demand goods and services for free. They are aggressive and usually work in groups of two or more.”

He has asked for the people who are photographed to contact police to help “resolve” the allegations.

Anyone who recognises these people or where they may be are asked to contact Queensland police.