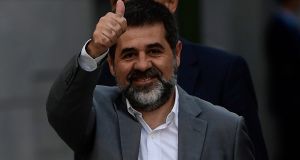 Catalan National Assembly president Jordi Sánchez, who is under investigation for sedition and rebellion, arriving at a court in Madrid. Photograph: Javier Soriano/AFP/Getty Images

A plan by pro-independence parties to make a jailed independence activist the new Catalan president is staunchly opposed by the Spanish government, which has warned it could respond by extending its direct rule of the region.

Pro-independence parties have scheduled a symbolic vote on Thursday in the Catalan parliament to underline their support for ousted president Carles Puigdemont to return to the post.

However, with Mr Puigdemont in exile in Belgium and barred by the constitutional court from being sworn in from afar, the independence movement has been seeking an alternative candidate.

Jordi Sánchez, who is president of the Catalan National Assembly (ANC) rank-and-file organisation, appears to have the backing of the two main secessionist forces, Mr Puigdemont’s Together for Catalonia (JxCAT) and the Catalan Republican Left (ERC).

However, Mr Sánchez has been in jail since October, awaiting trial for sedition, rebellion and misuse of public funds due to his alleged role in last autumn’s failed drive for independence. A supreme court judge would have to rule on whether he is able to leave the prison near Madrid where he is being held and attend the investiture ceremony.

“Catalonia cannot allow itself the disgrace of having a president in prison who is accused of serious crimes,” said Xavier García Albiol, leader in Catalonia of the Popular Party (PP), which governs Spain.

In October, Madrid took the unprecedented step of sacking Mr Puigdemont and his entire cabinet and introducing direct rule. Mr García Albiol suggested that if Mr Sánchez were invested, the Spanish government would consider implementing a “different kind” of direct rule, hinting that it could be extended and more stringent.

Spain’s justice minister Rafael Catalá said he believed it was likely the supreme court would reject a request by Mr Sánchez to be granted leave. He added that “nobody can do their job if they are behind bars, if they can’t go to their office at 8.30 in the morning and lead their team”.

However, there has been a precedent, with Juan Carlos Yoldi, an imprisoned member of terrorist group Eta, given leave to attend a vote in the Basque parliament in 1987 in which he failed to become regional president.

The tensions caused by the ongoing Catalan crisis were visible on Sunday, when Barcelona mayor Ada Colau boycotted a reception with King Felipe VI at the start of the Mobile World Congress technology fair in the city.

However, there has also been discord within the independence movement itself. The Popular Unity Candidacy (CUP), the smallest separatist party in the Catalan parliament, expressed disappointment at Mr Sánchez’s candidacy on Wednesday.

The CUP did manage to ensure an extra motion will be debated on Thursday which is likely to make the parliamentary session particularly fraught. It has proposed that the chamber “reaffirm and reiterate” the unilateral declaration of independence the Catalan parliament made in October.

Several independence leaders, Mr Sánchez included, have since said the declaration was merely symbolic, when questioned about it in court.