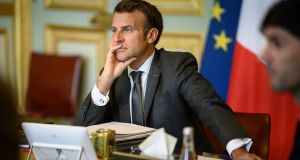 French President will meet the 150 members of the Citizens’ Convention on Climate next Monday to respond to the far-reaching, 600-page report. Photograph: Eliot Blondet/Pool via AP

French president Emmanuel Macron will receive the 150 members of the Citizens’ Convention on Climate next Monday to respond to the far-reaching, 600-page report they presented to the government on Sunday.

The goal of the report is to “change society in depth”.

Mr Macron created the convention in April 2019 in response to the gilets jaunes revolt. His office says the French leader was inspired by the Citizens’ Assembly in Ireland, established in 2016 to consider such important questions as abortion and climate change.

Members of the convention range in age from 16 to 80. They were chosen by lottery from telephone numbers and include secondary school students, farmers, firemen and medical doctors.

The convention consulted climate experts and met repeatedly over the past nine months, including by video-conference during the lockdown. Their plan seeks to reduce greenhouse gas emissions by 40 per cent by 2030 “in a spirit of social justice”.

The convention recommends a referendum to change the French constitution. It wants the preamble to note that “respect for rights, liberties and principles must not compromise preservation of the environment, which is the shared inheritance of mankind”.

The sentence “The Republic guarantees the preservation of biodiversity, of the environment and the fight against climate change” would be added to article 1.

The vast majority of the convention’s 150 proposals were passed by more than 90 per cent of members. A proposed referendum to create a law punishing “ecocide” or grave crimes against the environment, was approved by 99.3 per cent.

The only proposal that was rejected would have reduced the French working week from 35 to 28 hours for the same pay. Two-thirds voted against it, on the grounds it would be “incomprehensible” at a time of economic crisis. The business syndicate Medef said a 28-hour-week would have meant “economic and social suicide”.

Reducing the speed limit on motorways from 130km/h to 110km/h was one of the most hotly debated issues, and was approved by only 60 per cent of members. The measure would reduce carbon emissions by 20 per cent, cut fuel consumption and save lives, it was argued.

The convention calls for a ban on polluting vehicles in city centres, and would increase funds for bicycle lanes from €50 million to €200 million annually. It encourages employees to work remotely at least one day per week, proposes zero interest loans for the purchase of clean cars and seeks a reduction in VAT on train tickets.

Measures to limit the “ill effects” of air travel were approved by 88 per cent. The convention would curtail the construction of new airports and the expansion of existing ones.

All buildings would be renovated to make them more energy efficient by 2040. Heated cafe terraces and night lighting for shops would be banned. Thermostats would be set no higher than 19 degrees centigrade in winter, air conditioning no lower than 30 degrees in summer.

The convention foresees a 4 per cent eco-tax on companies that distribute more than €10 million in dividends annually; 2 per cent on those under €10 million. Companies would be required to make their carbon footprint public. Positive environmental records would translate to tax advantages and access to loans.

A quarter of dry goods and liquids would be sold by quantity in reusable containers from 2023. The question “Do you really need this?” would be asked of customers making purchases online.

The production of food accounts for a quarter of the carbon emissions of French households. The convention recommends reducing consumption of meat and dairy products by 20 per cent.

Much of the political class praised the work of the convention as a fine example of participative democracy.

Critics, including the French Green party EELV, pointed out the exercise did not address the issues of nuclear energy or a carbon tax, which was a root cause of the gilets jaunes revolt.

Christian Jacob, the leader of the conservative party Les Républicains, said the report was based on “a logic of economic decline, constraint and punishment”. The far-right leader Marine Le Pen said it had made “crazy proposals with no sense of economic reality and no social or ecological relevance”.