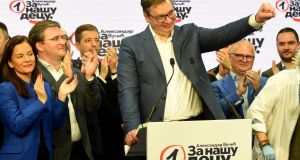 Serbian president Aleksandar Vucic has celebrated a crushing victory for his party in elections boycotted by most opposition groups, ahead of a week of high-profile international talks on Belgrade’s relations with Kosovo.

With 70.6 per cent of votes counted from Sunday’s parliamentary election, provisional results gave Mr Vucic’s right-wing Serbian Progressive Party 61.6 per cent, far ahead of its current coalition partners the Socialist party on 10.3 per cent and the Serbian Patriotic Alliance with 3.6 per cent.

A handful of seats will automatically go to parties representing some of Serbia’s ethnic minorities, but no other parties crossed the 3 per cent threshold to enter parliament after a boycott by leading critics of Mr Vucic.

They accuse him of creating an autocratic system in which the ruling elite controls all levers of power – including most influential media outlets – and of putting public health in danger and making normal campaigning impossible by holding the election during a pandemic.

Mr Vucic denies the claims and insists safety was a priority in a ballot that was rescheduled from April. Officials said turnout was 50.3 per cent, down from 56.1 per cent four years ago.

“I’ve been in politics a long time, but I’ve never experienced such a moment,” Mr Vucic told supporters on Sunday night. “I’m talking about a historic moment . . . We have won everywhere, even in places where we’ve never won before.”

Urszula Gacek, the head of an election monitoring mission from the Organisation for Security and Co-operation in Europe, said on Monday: “The dominance of the ruling party risks the neutrality of the country’s democratic institutions, and dialogue is needed to bridge the deep political divisions and protect pluralism.”

After being an ultra-nationalist in the 1990s and serving as information minister under warmongering Serbian leader Slobodan Milosevic, Mr Vucic now portrays himself as a conservative “man of the people” who wants Serbia to join the European Union while maintaining close ties with Russia and China.

He was scheduled on Monday evening to meet Miroslav Lajcak, the EU envoy to negotiations between Serbia and Kosovo, amid intensifying international efforts to kick-start talks that broke down in late 2018.

Mr Vucic plans to discuss the issue with Russian president Vladimir Putin when he travels on Tuesday to Moscow, where he will attend a military parade on Red Square on Wednesday before flying to Washington for talks at the White House on Saturday with his Kosovo counterpart Hashim Thaci.

Mr Vucic and Mr Thaci previously suggested that a land swap could help clinch a deal to normalise Serbia-Kosovo relations, but now say border changes are not on the agenda.