Macron takes France to top of league of global appeal 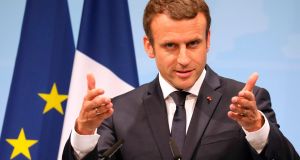 France has overtaken the US and Britain as the world’s top soft power, according to an annual survey examining how much non-military global influence an individual country wields.

Britain headed the list two years ago, but was edged off top spot by the US last year. However, the election of Donald Trump, the Brexit vote and the election of Emmanuel Macron appear to have shifted global perceptions.

“Soft power”, a term first coined by the academic Joseph Nye, is the ability to harness international alliances and shape the preferences of others through a country’s appeal and attraction.

France’s rise from fifth to first is in part attributed to the influence of the centrist Macron, but is also based on the vast French diplomatic network, which is unrivalled in terms of membership of multilateral and international institutions.

The index’s top five countries by order are France, the UK, US, Germany and Canada. Outside the top five, Japan and Switzerland have risen to sixth and seventh respectively. Overall the survey shows a sharp reversal from last year’s narrative of a Europe in soft power decline.

The index, called the Soft Power 30, combines polling in 25 countries and objective digital data to measure a country’s impact. The polling looks at the perceived favourability towards countries.

The index, now in its third year, was compiled by the PR firm Portland Communications in conjunction with the University of Southern California school of public diplomacy.

The report found that “despite the looming public negotiations the UK’s objective soft power assets, both state and privately owned remain strong”. But it warned the polling showed Britain’s rating was falling, largely due to a decline in favourability among European countries. Outside the EU, perceptions of the UK remained static.

In line with other polling research, notably by the Pew Research Centre, the report found that Donald Trump’s divisive rhetoric was lowering respect for the US. Polling on the US was undertaken before the president announced it was withdrawing from the Paris climate agreement, a decision that is likely to have further damaged the US’s reputation.

The bottom five in the index are Russia, the Czech Republic, Hungary, Brazil and Turkey, suggesting authoritarian regimes opposed to migrants have less soft power. In Brazil the success of the Rio Olympics has been overshadowed by the impeachment of Dilma Rousseff and the ensuing economic instability. Argentina, Mexico and Chile sit just outside the top 30.

Commenting on the report, Mr Nye said: “Under normal circumstances, soft power is a relatively stable asset. But these are not normal times. The results of this year’s Soft Power 30 reflect the changing balance of global influence. Europe has regained its confidence and Asian soft power is on the rise. At the same time, President Trump’s drive to put ‘America First’ continues to undermine US soft power.”