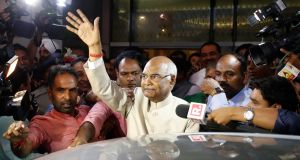 Indian MPs and state legislators voted on Monday to elect the country’s next president for five years.

The two-candidate contest is likely to be won by Ram Nath Kovind, a 72-year old “low-caste” Dalit and former state governor, who is supported by prime minister Narendra Modi’s ruling Hindu nationalist Bharatiya Janata Party (BJP), which enjoys a majority in parliament and in state legislature.

His rival is Meira Kumar, also a 72-year old Dalit who was India’s first woman speaker till 2014; but she lacks opposition strength in the 4,896-strong electoral college that votes in a new president in a complex system of polling.

The outcome of the elections will be known on July 20th and the new president will be sworn into office five days later, replacing the incumbent Pranab Mukherjee, who has occupied India’s highest public office since 2012.

Analysts said Mr Kovind’s likely election would be the first by an Indian leader who is close to the Rashtriya Swayamsevak Sangh (RSS), or National Volunteer Corps, that provides the BJP “spiritual and philosophical” guidance.

The RSS believes in keeping Hinduism pure by protecting it from “outside” influences such as Islam and Christianity, and has been accused of stoking religious hatred against Islam.

“Kovind’s anticipated election will definitely assist the BJP in consolidating even great political power in the run-up to the 2019 general elections,” said political analyst Seema Mustafa. His candidature was also likely to help the BJP garner Dalit votes that are electorally significant in many states, she added.

The Indian president’s role is largely ceremonial, but on several occasions over the past two decades the incumbent has played a critical role following political uncertainty following a hung parliament after elections.

“Kovind will make an exceptional president,” Mr Modi said when announcing his candidature last month. After casting his vote in the presidential election on Monday, the prime minister said his government would “offer full co-operation” to Mr Kovind.

The new president will move on July 25th to the 340-acre red sandstone Rahstrapati Bhawan, a massive residence built for the British viceroy in the 1930s.

India’s newly elected first citizen will travel to this new home in an ancient horse-drawn carriage, escorted by mounted lancers whose uniforms and accoutrements date back to the lancers’ founding by the East India Company in 1773.

The palace’s facilities include a golf course and polo ground, multiple tennis courts, a grand swimming pool and squash court complex, as well as a modern cinema hall and a school for children of the thousands who run the complex.

The palace’s 13-acre Mughal Garden is noted for its assorted plants and trees and is open to the public for two months each year, while its museum is packed with exotic paintings and precious objects.

5:39 Everyday banking: Are we getting less but paying more?