‘If you’re looking for the person responsible for this, then it’s me and only me,’ says president 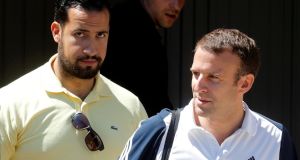 French President Emmanuel Macron, flanked by Alexandre Benalla who is now the subject of a preliminary investigation. Photograph: Philippe Wojazer/Reuters

French president Emmanuel Macron has broken his silence over the presidential aide caught on camera beating May Day protesters, saying he alone was responsible for the scandal that has dominated French politics for more than week.

A string of stories have emerged in recent days about how Mr Macron and his office handled the case against Alexandre Benalla, a 26-year-old security adviser to the president subject to a preliminary investigation into allegations of violence and impersonating a police officer.

Mr Macron and his team have been criticised for allegedly trying to cover up the scandal by failing to inform judicial authorities about an incident that took place more than two months ago. Critics say it demonstrates how the president is aloof and out of touch despite being elected on a promise to clean up French politics.

“If you’re looking for the person responsible for this, then it’s me and only me,” Mr Macon told deputies from his governing party in Paris, which was broadcast on French television channel BFMTV late on Tuesday. “My team at the Elysée Palace did what it had to do.”

“No one on my team has been protected, ever,” Mr Macron said in the broadcast. “It was me who decided to trust Benalla and it was me who approved that sanction.”

Élysée spokesman Benjamin Griveaux said on Wednesday that “profound changes will take place” after the summer break as a result of the Benalla case. “Recent events are the responsibility of individuals, but collective control procedures have failed and need to be addressed,” said Mr Griveaux, adding that “a reorganisation of the [presidential] security forces seems necessary”.

It is unclear whether voters will be convinced. A survey by pollster Ipsos published on Tuesday – the first since the scandal broke – found that Mr Macron’s popularity has dropped to 32 per cent, down four points since June and the lowest level since September 2017.

Mr Macron’s political opponents leapt on the fact that Mr Macron chose to address his own party rather than the French people. Gérard Larcher, Senate president from the centre-right Republican party, said the Elysée’s management of the Benalla affair was marked by “amateurism and panic”.

He told the right-leaning daily Le Figaro: “I would have preferred him to speak to France and the French. [It is] not in front of [his own] deputies . . . that the president must speak, but in front of the French from whom he derives his legitimacy.”

Mr Benalla, who has admitted wrongdoing, was fired on Friday and interrogated by French police as part of the preliminary investigation. He has previously been suspended for two weeks but kept on the payroll, and was spotted on the bus transporting the French national football team down the Champs Élysées after their World Cup victory earlier this month.

The affair only came to light after a video implicating Mr Benalla was widely circulated online and published in Le Monde newspaper.

It also emerged that Mr Benalla was granted the use of an apartment, a car and a chauffeur and that he had obtained a pass to access the National Assembly. He is also alleged to have obtained confidential video surveillance tapes from police officers showing his actions, according to the interior ministry.

The affair has emerged as the biggest political crisis of Mr Macron’s tenure and threatens to tarnish his image further as he enters the second year of his presidency amid steadily declining approval ratings. According to a separate poll by Elabe for BFMTV, 80 per cent of French people are shocked by the Benalla affair, of which one in two are “very shocked”.

The opposition have called for a vote of no-confidence in Mr Macron’s government, a move which is unlikely to succeed because the president has a solid majority.

Edouard Philippe, prime minister, defended the government on Tuesday, saying that “an isolated incident carried out by this person . . . does not constitute a state scandal”. – Copyright The Financial Times Limited 2018