Hundreds of international election observers invited amid concerns over rigging 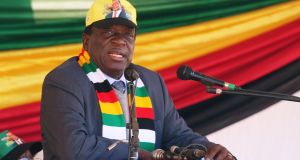 Zimbabwe’s first general election since the country’s former president Robert Mugabe was ousted from power last year will be as much about how the poll is won as who wins it.

Next Monday’s election offers the southern African country its first real opportunity to legitimise its government since the 94-year-old dictator was forced to retire by the ruling party in November, following a military takeover.

Since replacing his predecessor, President Emmerson Mnangagwa and his Zanu-PF supporters have insisted the former liberation movement has ditched its dictatorial approach to governance in favour of the principles of democracy.

They maintain that the party’s main goal is to rebuild an economy that was shattered by the destructive policies implemented by successive regimes under Mugabe.

Good intentions are not enough from a party accused of using violence, intimidation and vote manipulation

“Zimbabwe is open for business,” has been Zanu-PF’s mantra when dealing with the investor community since November.

But for most people, good intentions are not enough from a party accused of using violence, intimidation and vote manipulation to rig every national election since 2002.

In a bid to reassure stakeholders, for the first time in 16 years the government has invited hundreds of international election observers from the West to join regional and local monitors in supervising the election process from start to finish.

To date pre-election violence and intimidation in Zimbabwe has been much lower than in previous years, prompting some observer groups to say that the electoral environment is the best it has been in decades.

However, the attempted assassination of Mnangagwa last month at a Zanu-PF election rally in Bulawayo has highlighted the situation’s fragile nature and how internal party power struggles can undermine it.

In addition, Zanu-PF remains closely aligned with the military, which experts say will be a cause for concern if the party loses the election, as it remains unclear if the army will accept such an outcome.

Opposition parties and civil society groups are also worried about the impartiality of the Zimbabwe Electoral Commission (ZEC), the institution tasked with overseeing the election in a non-partisan manner.

In recent days an alliance of opposition parties led by the Movement for Democratic Change (MDC) outlined key issues around the transportation and the storage of ballots that it wanted the ZEC to deal with before the poll.

“We made specific demands to ZEC on the issue of storage and the ability of the agents to escort the ballot papers,” MDC secretary general Douglas Mwonzora told Zimbabwe’s Daily News newspaper on Wednesday.

Concerns have also been expressed about the design of ballot papers, which are said to favour Mnangagwa and Zanu-PF, and the layout of polling booths, which may compromise a voter’s right to cast their ballot in secret.

The MDC Alliance went as far as to threaten a boycott of the election on Wednesday over the ZEC’s refusal to address its concerns, but in the end Nelson Chamisa, head of the MDC, said the party had decided to remain involved as it believed it could still win.

“We will defeat the referee and player,” he said at a press conference in Harare. “We will not allow them to get away with their shenanigans”.

In response to the MDC’s protests, the Southern African Development Community observer mission confirmed it was concerned about the legitimacy of the process and warned it would not endorse a “sham” poll.

About 5.6 million Zimbabweans are registered to vote in Monday’s election and there are 23 candidates contesting the presidential race. Fifty-five parties are also facing off in the parliamentary election, the biggest number by far in Zimbabwe’s post-colonial history.

Mnangagwa and Chamisa are the frontrunners in the race for the presidency. The former is a liberation struggle hero and a party hardliner who supported Mugabe for decades, while the latter is a lawyer who took over leadership of the MDC from its founder, Morgan Tsvangirai, who died in February.

Chamisa’s energy and charisma have resonated with voters, especially the youth

When campaigning by political parties got under way many analysts said Zanu-PF would retain power for two reasons: it had ousted Mugabe after 37 years in power and would benefit from the goodwill that generated; and the MDC without the talismanic Tsvangirai would be a shadow of its former self.

However, if the latest election survey from researchers Afrobarometer is accurate, Chamisa’s energy and charisma have resonated with voters, especially the youth.

Released in late July, the survey asked 2,400 adults who they wanted as president. And its result showed 40 per cent backed Mnangagwa while 37 per cent supported Chamisa.

So at this stage the presidential election appears too close to call.

What is much clearer is that international investors want to see signs that the rule of law has been reinstated in Zimbabwe before they commit to developing the country’s economy.

An election that is deemed free and fair by international observers will go some way to providing this assurance. Without such an endorsement, Zimbabwe could well remain the pariah state it has been since 2002.