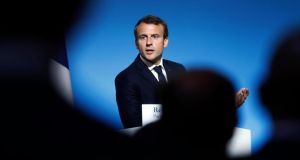 Emmanuel Macron: the right sees him as interventionist while the left portrays him as the “president of the rich”. Photograph: Étienne Laurent/pool/EPA

Four months after his election the centrist French president Emmanuel Macron seems incapable of rallying public opinion. The right sees him as interventionist while the left portrays him as the “president of the rich”.

French media fixate on news that is detrimental to Macron, such as a report in late August that his make-up artist billed the Élysée Palace €26,000 for his first three months in office.

On Wednesday Macron was widely criticised for what he called a “public appeal” to landlords to reduce rent by €5 a month, to compensate for a €5 cut in the “personalised housing allowance”, or APL, which is paid to 6.5 million people.

Each time the state increased allowances, Macron said, landlords simply raised the rent. They now had a “collective responsibility” to lower rent.

Macron’s appeal was condemned by left, right and 34 charitable associations that met on Wednesday to demand the allowance be maintained.

France spends €40 billion a year on housing, or 2 per cent of GNP. It is the highest rate in Europe, yet the French are arguably no better housed than other Europeans, the front-page editorial of the conservative newspaper Le Figaro said.

The confrontation over housing policy is only beginning. The housing minister Jacques Mézard will present a reform in cabinet next week that will combine lower allowances with lower rents.

Representatives of the housing industry said the government was trying to make property investors pay for its mistakes. “This is worthy of the Soviet regime,” Jean Perrin, president of the national real-estate union UNPI told the Huffington Post.

Conservative politicians said Macron’s “shocking” appeal violated a constitutional right to dispose of one’s property as one chooses. The socialist senator Marie-Noëlle Lienemann said, “An appeal for charity cannot be a substitute for public policies.”

Alexis Corbière, a deputy in the National Assembly and spokesman for Jean-Luc Mélenchon, the leader of the far-left France Unbowed, told RTL radio sarcastically that he was making a “public appeal” for butchers and bakers to lower prices.

A poll published on Tuesday night gave Macron a 46 per cent approval rating. Forty-five per cent of respondents said France Unbowed “best embodies opposition to the president”, ahead of the conservative Les Républicains (22 per cent), far-right Front National (21 per cent) and the Socialist Party (8 per cent).

Fortunately for Macron, his adversaries have been in disarray since losing elections in May and June. That may be changing. Mélenchon and Philippe Martinez, the leader of the CGT communist trade union, met on Wednesday in an effort to resolve their differences. France Unbowed and the CGT have scheduled separate protests against the reform of the labour code, on September 23rd and September 12th respectively.

Nor is Macron helped by the Socialist Party he once belonged to. His predecessor, François Hollande, a particularly ineffectual president, last month criticised Macron for “demanding unnecessary sacrifices of the French”.

Martine Aubry, the daughter of the former European Commission president Jacques Delors and a former leader of the Socialist Party, told France Inter radio that Macron’s term is “off to a bad start”. She accused the president of failing to address joblessness and purchasing power, saying his policies will create “precariousness and austerity”.

Macron’s labour reform is intended to make it easier to hire and fire, just as his housing reform is meant to loosen up the housing market. “Macron has not understood that labour law is a protection for workers,” Aubry said. “When I see the decrees [reforming the labour code], we’re going back 50 years.”

To save €20 billion in the 2018 budget the Macron administration intends to cut back on overseas military operations and sell off €10 billion in state holdings in, among others, the energy giant Engie, the telecommunications company Orange, Paris airports and the national lottery.

Knee-jerk criticism of Macron overshadows praise for positive measures. His prime minister, Édouard Philippe, announced the government will abandon the “social regime for the self-employed”, or RSI, which was a blight on the lives of 6.6 million people who endured exorbitant charges, harassment by bailiffs and irregular payment of their pensions.

Macron has also initiated reform of the SNCF railway company, which has accrued €44 billion in debt.