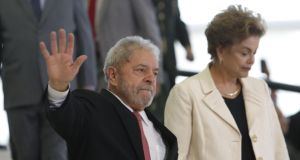 The former Brazilian president Dilma Rousseff has been formally charged for the first time in the South American country’s three-year-old investigation into political corruption.

The country’s chief federal prosecutor, Rodrigo Janot, accused her of being part of a criminal organisation involving leading figures in her Workers’ Party. Among those also charged were her predecessor and mentor Luiz Inácio Lula da Silva, as well as two former Workers’ Party finance ministers and the party’s current president, Gleisi Hoffmann.

Mr Janot said the group used their control of the presidency to mount a bribery scheme centred on state bodies such as the oil giant Petrobras, the state development bank BNDES and the planning ministry. Prosecutors claimed, citing evidence provided by businessmen convicted in the scheme, that at least 1.49 billion reais (€400 million) was paid in bribes.

“Justice of the Enemy”

Impeached last year over her handling of the economy, Ms Rousseff had until now avoided charges in the corruption scandals that started as an investigation into wrongdoing at Petrobras. In a statement she denounced the charge as having “no basis whatsoever” and portrayed herself as the victim of “Justice of the Enemy”.

Lula has already been sentenced to nine years in prison in one of the anti-corruption cases brought against him and is facing charges in five more. Mr Janot described him as “the great idealiser” of his party’s corruption scheme. Lula is appealing his sentence while running for the presidency in next year’s elections.

Lula’s former finance minister Antonio Palocci, also charged on Tuesday, was jailed for 12 years earlier this year; he is attempting to negotiate a plea-bargain deal to reduce his sentence. Ms Hoffmann was questioned by the Brazilian supreme court last month in a separate corruption case. The Workers’ Party said the new charges “express the continuous persecution against Lula” and the party.

As part of the probes, police on Tuesday raided an apartment in the northeastern city of Salvador linked to former minister Geddel Vieira Lima. They found suitcases and boxes filled with Brazilian and US currency. Police needed 14 hours and seven money-counting machines to establish that they contained the equivalent of €13.75 million.

Mr Vieira Lima was arrested earlier this year on an obstruction-of-justice charge. Until he was forced to quit the cabinet at the end of last year, in a separate corruption scandal, he was one of the closest advisers to President Michel Temer, being a member of his four-man kitchen cabinet, all of whom have been charged or put under investigation for corruption since Mr Temer took over following Ms Rousseff’s impeachment.

After more than three years the flood of Brazilian corruption scandals shows no signs of ebbing, with this week also seeing the questioning of the president of the country’s Olympic committee, Carlos Arthur Nuzman. He was taken from his home as part of Operation Unfair Play, which is investigating corruption around last year’s Olympic Games, in Rio.