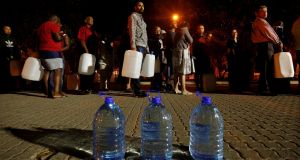 People queue to collect water from a spring in the Newlands suburb in January as fears over the city’s water crisis grow in Cape Town, South Africa. Photograph: Mike Hutchings/Reuters

The subsequent drop in usage has ensured supply can continue for a month beyond that; May 11th is now earmarked as the date when the city may have to turn off its taps.

Water supplies to the city are under threat because, according to scientists, rainfall in the area is coming later and dropping more erratically, often missing its catchment areas.

However, since being warned, local residents have managed to reduce their consumption from more than 600 million litres of water per day to just below 550 million, while agricultural usage has also dropped dramatically.

The commercial farmers’ union, AgriSA, says its members in the Western Cape Province have cut their water usage by between 60 per cent and 80 per cent recently.

On Wednesday, the city’s governing Democratic Alliance party welcomed the new water consumption figures. But the party insisted that a further 97 million litres of water per day needed to be saved to avoid “Day Zero” – when the residential water supply is turned off.

Party leader Mmusi Maimane said that collectively dam levels were at 25.5 percent. Furthermore, over the past week the city had consumed an average of 547-million litres per day, which was a marked improvement on the week before, he added.

“However, this is still 97 million litres more than the 450 million litres per day target we need to reach and maintain to defeat Day Zero,” Mr Maimane said. “It [Day Zero] is still a very real possibility if we take our focus off of saving water.”

Queueing by the public for water rations will begin once the dam levels drop to 13.5 percent full because of the difficulty in extracting the last 10 per cent of the dams’ full capacity.

In late January, city officials warned that if Day Zero arrives up to two million residents will have to queue at 200 designated points around the city for a daily quota of 25 litres of water.

In its efforts to avoid this scenario, Mr Maimane said the city had introduced several “demand management” techniques to further reduce usage. “The first of these is pressure management, which lowers consumption by reducing the rate and intensity at which water flows to taps,” he said.

Other such measures include the introduction of high water-usage tariffs from February 1st, and household flow regulators in all residences where consumption is higher than 10.5 kilolitres per month.

Three desalination plants are also under construction and combined they will add about 16 million litres of water per day into the system by May.

In addition, and much to the relief of city residents, South Africa’s weather service has forecast heavy rainfall – at least 15mm – in the drought-stricken province for Friday evening, which should push Day Zero further out.